With a major exhibition currently at  TATE Britain, it’s time to get a London Group perspective on one of Britain’s most influential artists. 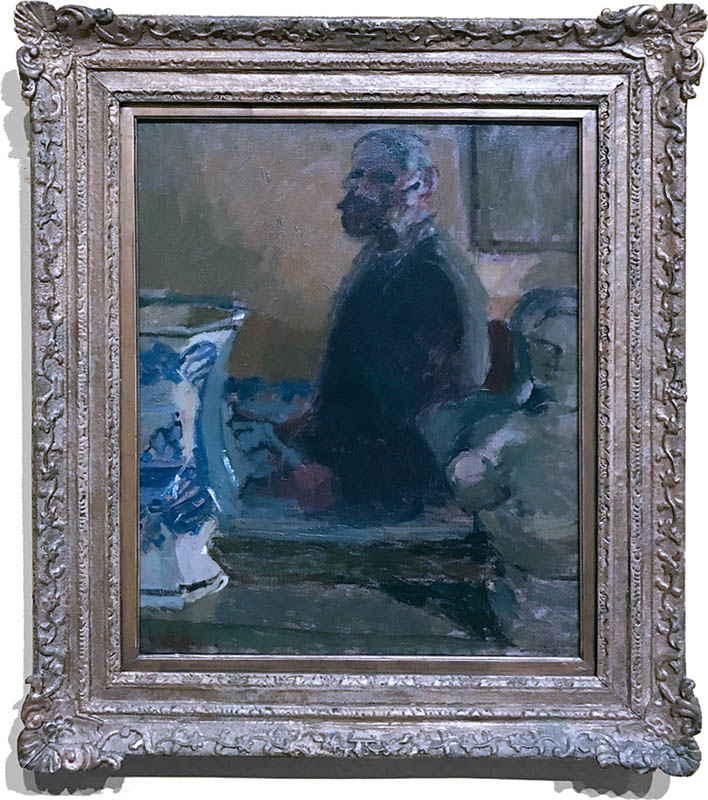 There are a number of self-portraits in the Walter Sickert exhibition currently on show at Tate Britain. One is dated 1913, the year that Sickert chaired a number of meetings in his Fitzroy Street studio which led to the formation of The London Group later that year. The fifty-three-year-old artist, looking stern and bearded, had been round the block a few times already, most recently as leader of the Fitzroy Street Group and the Camden Town Group with two exhibitions at the Carfax Gallery which, unfortunately, had been commercially unsuccessful but hugely influential in the development of British painting at the time.

Walter Richard Sickert was born in Munich in 1860 to an Anglo-Irish mother and a Danish father. He toyed with becoming an actor but eventually opted for a career as an artist. Controversially, but perhaps not surprisingly, he chose cockney music halls and scenes from every-day life as subjects for his early paintings. In the 1880s he had worked with Degas, studied briefly at the Slade, then under Whistler, visited Venice regularly and from 1899 to 1905 lived and worked in Dieppe. On his return to London he took a studio at 19 Fitzroy Street from where he introduced and championed contemporary French painting to younger British artists, opening his studio to discussion groups in a small gallery where enlightened patrons could view contemporary British art. Roger Fry, elected to The London Group in 1917, had organised two seminal and important exhibitions bringing contemporary French painting to London, “Manet and the Post-Impressionists” featuring Cézanne, Gauguin, Matisse and Van Gogh in 1910 and “Second Post-Impressionist Exhibition of English, French and Russian Artists” in 1912 showing Picasso, Matisse Cézanne, Derain and Vlaminck. At exactly the same time from 1908 to 1912 Sickert was teaching at Westminster School of Art resulting in many of his pupils becoming London Group members.

Never wishing to miss out on any developments, always ‘omnipresent’ as art historian Wendy Baron describes him, Sickert had been proactive with younger artists in forming the Fitzroy Street Group in 1907 and the Camden Town Group in 1911 but at Sickert’s insistence no women artists were to be allowed in the latter. The enlargement of the Camden Town Group in 1913 was to tap into the 50% of humanity Sickert had denied as well as enlarging the new group’s remit to cover sculpture, Jacob Epstein and Henri Gaudier-Brzeska in particular. But Sickert didn’t like the way the wind was blowing, resigning from The London Group on 7th March, 1914 just before its first exhibition citing the inclusion of Percy Wyndham Lewis and his followers and their ‘pornometric’ work as a reason for leaving, along with Lucien Pissarro. However, when Wyndham Lewis led his disciples out of The London Group to form a separate group of British Futurist painters (The Vorticists), Sickert asked to return to the Group and was re-elected in 1916, continuing to exhibit regularly with The London Group during the inter-war years when Roger Fry, Bloomsbury and contemporary French painting were in total control. Sickert also exhibited with the New English Art Club, the Allied Artists’ Association and was elected a Royal Academician in 1934.

It didn’t end there. In 1936 there was a revolt in The London Group to remove the incumbent president, the Bloomsbury inclined sculptor Rupert Lee. Plotters Ethelbert White and Raymond Coxon drove to Kent to visit the seventy-six-year-old Sickert to ask if he would stand for president in the forthcoming elections. He accepted the offer “on condition that the present Secretary and Treasurer are retained”, unlikely in that the super-efficient Secretary Diana Brinton-Lee was Rupert Lee’s partner. Lee lost the vote, the Sickert plan did not work out and instead of a president the Group put in place a Chairman, the sculptor R.P. Bedford. Vanessa Bell and Duncan Grant resigned in protest at the outcome of the vote and the dominance of the Bloomsbury circle in The London Group finally came to an end. Sickert’s last showing with the Group was in November 1935 when he showed “Sketch for the Raising of Lazarus”. He died in 1942 leaving a widow, his third wife Thérèse Lessore, herself a founder member of The London Group in 1913 and one of the women artists whose membership of the Camden Town Group he had denied.