I use a variety of different materials – mostly wood, but also stone, clay, and paper – to explore the concept of movement and animation in non-kinetic sculpture.

The natural components of the materials inform the constructed sculptures. Most recent practise comprises carved stone, cut and re-configured with acrylic rod based on a collaborative project with a dancer.

I create abstract wood and stone sculptures which are lively and robust carved constructions with a rich variety of textures. These sculptures deliberately convey a sense of movement, animation, imbalance and unease, without themselves being kinetic.

For many years I have been investigating the idea of movement based particularly, but not exclusively, on the moving figure. I try to encapsulate a combination of movements rather than just a static pose, stretching, twisting, pushing and pulling, and this concern is redefined in the wood. Looking beneath the skin, I am particularly concerned with the internal structure and exposing the underlying combinations and counter-active balances of movements rather than re-creating the outer surface or skin which masks the tensions and stresses contained within. I do not use the whole figure, but often just a small area, so while the final sculpture is not intended in any way to resemble the human form, it contains within it the symbolism of action.

Where possible, I split the wood naturally along the grain to discover its own rhythms and movements, and work with these to re-create and generate the energy and vibrancy of the initial inspiration. Raw edges and tool marks are left intentionally to contrast with the natural, deliberately unrefined splits and the other areas that have been smoothed. Each sculpture is made up of several complex pieces of wood which are distinct and exiting passages in themselves, that together work to make a strong, unified sense of the whole work. Most recently I have used machine planed timber as a counterbalance for the carved elements; these act as both a connecting link and a distancing between the formed components, creating a new spatial identity between the elements. 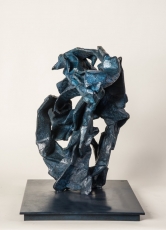 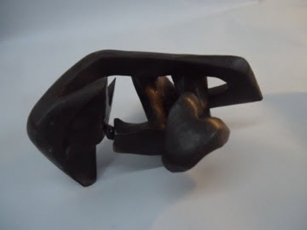 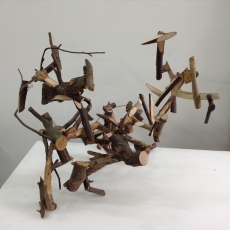 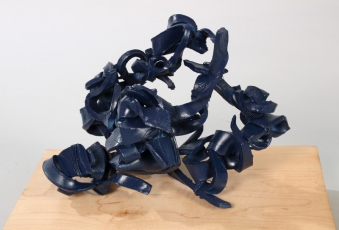