While my practice is grounded in printmaking, I revel in breaking down the limitations of materials and reinventing traditional handicrafts. My highly tactile works capture a child like sense of delight with a combination of humour and melancholy.

I take the fabric of domestic life, from family snaps and children’s clothes to ceramics and embroidery, and reconfigure it into work that explores nostalgia, identity and the loss of innocence. As one of a twin, I’m fascinated by dualities and my personal experience of losing an older sister suffuses my work with warmth, intimacy and a sense of the precariousness and fragility of what we treasure.

In Delft Blue, the classic Dutch tile format is given a surreal twist. A smiling girl paddles outside her flooded home. Children dangle from London landmarks, oblivious to danger. The narrative possibilities multiply in a tiled expanse where childhood dreams are played out beneath an overshadowing air of threat.

In my latest body of work, I’ve created a series of patchworks, sewing together newspaper reports of the London riots with clothes I wore as a child. Using this ancient craft technique, traditionally handed from mother to daughter, I open up a dialogue about inheritance and creativity in response to media representations of violence.

Tisna Westerhof is a graduate from the Royal College of Art in The Hague, Holland and obtained her MA at Central St Martins College of Art in London in 1999. Tisna is co-founder and curator of hARTs Lane Studios, an experimental art project space in New Cross Gate, London. 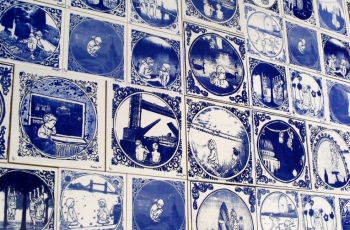 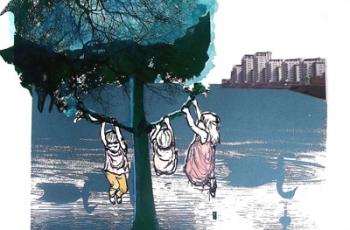 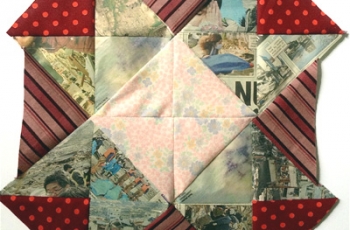 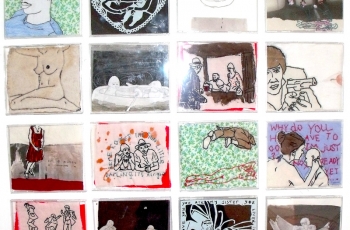