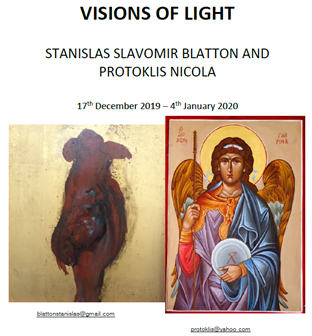 Stanislas Slavomir Blatton LG was born in Poland and Studied at the Academy of Fine Arts in Warsaw. He graduated in 1969 with an MA in Painting and Graphics.  He gained a scholarship from the Ministry of Culture and in 1970 moved to London. From1975 – 2004, he taught Etching at the Working Men’s College for Men and Women in Central London. He was then employed as Conservation Officer at the National Gallery in London.

Protoklis Nicola studied at Birkbeck, University of London, where he gained a BA and an MA in Philosophy. It was during this period of contemplative studies that he developed an awareness of the deep mysteries of human existence and how important it was to ask questions. Protoklis feels that his fascination with religious icons is a natural extension of his Philosophy studies. He studied icon painting at The Prince’s School of Traditional Arts where he graduated in 2015 with a PhD in iconography.

In the essay Cultivated Uncertainties: the Painting of Stanislas Słavomir Blatton Habib, William Kherbek, expresses well Stanislas’s artistic vision: “Blatton finds ways to pose formal questions about the interplay of image and language as well as ideological questions about the roots of totalitarianism. His works serve as records of human experience in the fraught political ecology of the preceding century, but also as deeply personal statements which often endeavour to destabilise the monolithic certainties on which power rests. His recent work continues to be characterised by the same forthright, eternally probing vision that animated his first major works. This determination not to settle into easy orthodoxies – be they aesthetic, relational or political – means that Blatton’s painterly voice remains as relevant and as necessary as it has ever been.”

In the contemplative art of painting icons Protoklis Nicola is committed to the traditional view that in icons the simplicity of form and limited colours all serve to emphasise the intellect’s ascent towards the divine. Through the orientation of desire towards God a new dynamic relationship can be established that is defined by a perpetual participation in the Infinite Being of God. This state is characterised by the experience of encountering new things that are always curious and awe-inspiring. When painting an icon the ‘holy’ form or theomorphic aspect of the figures depicted becomes an expression of the personal journey and objective of the painter and viewer to become God-centred and achieve union with the divine.