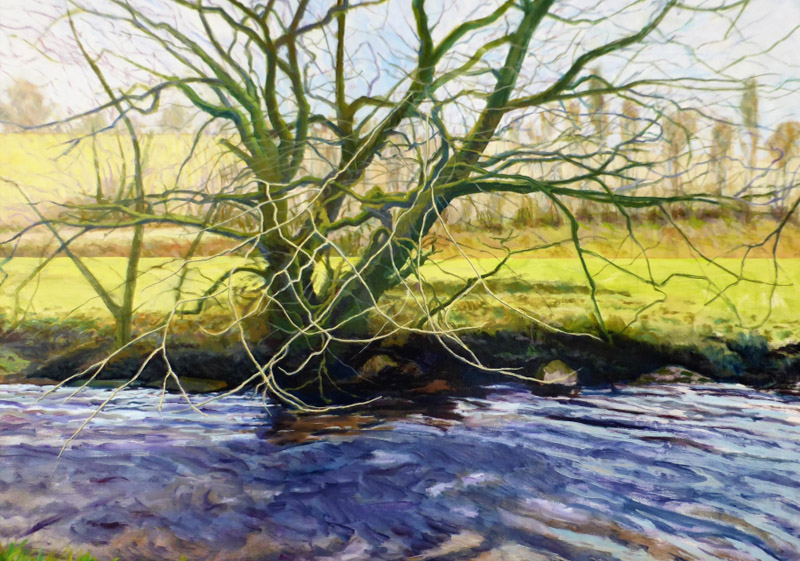 The single most formative influence on David Shutt’s life was visiting L S Lowry
at his house, which was near his family home, a number of times around 1960 as a
school boy. The large “Ebbw Vale” painting was in progress on the main easel in
his front room. It was Lowry who first made David Shutt aware that one could be
an artist and encouraged him to bring some of his paintings to his house and talked
to him about them.

Born in West Kirby, The Wirral, in 1945, David Shutt followed Lowry’s advice
and applied to do the Manchester Foundation Course (1964) and was taught by
Adrian Henri who was his tutor. Henri was very supportive but Shutt was
particularly predisposed by Lowry to respond to the aesthetics of the Euston Road
School whose ex-teachers and pupils he met as an undergraduate at Leeds
University (1968) in Quentin Bell and Lawrence Gowing and as a post-graduate in
William Coldstream and Euan Uglow at the Slade (1979). It was there Shutt also
met Patrick George and Patrick Symons, both substantial influences on his work.
The most particular and focussed teaching he experienced however was from
Norman Norris.

After leaving the Slade, Shutt became a visiting tutor at a number of London art
schools but continued to work from the figure in a studio made available for ten
years at the then London College of Printing at the Elephant and Castle. Euan
Uglow used to call in on his way to the Slade occasionally and look at Shutt’s
current painting.

It was from Patrick Symons and his extraordinarily personal approach to art
education that Shutt was able to apply to his own work and teaching, which led to
him becoming Head of the Art and Design Department at Canterbury Christ Church
University. The need to develop his own work and continuing professional practice
as an artist were absolutely homogeneously welded together: the one informed the
other which eventually led to him resigning in order to devote all his time to
painting.

Shutt moved to Greece for ten years, devoting himself to his practice. He has
recently spent increasingly more time in the UK, in Cornwall and Kent.