Remembering the remarkable achievements of London Group President Susan Haire, as she steps down from her role.

Under Peter Clossick’s presidency, Susan Haire was elected to the Group in 2004 along with Mark Ainsworth, Jeff Dellow, Tricia Gillman, Marcel Hanselaar, Richard Kemp, Peter Lowe and Wendy Taylor from a large number of nominations. That year the Group held its 91st London Group Annual exhibition at the Menier Chocolate Factory in Southwark Street, a major undertaking costing £25,500 to hire for three weeks, but even after this huge outlay the Group remained in a healthy financial state.

In 2005 Philip Crozier replaced Peter Clossick as president and Susan, shortly after joining the Group, became Honorary Secretary, not just in name, but working closely with Philip running the Group. Bankside Gallery, close to Tate Modern, was the venue for this year’s annual, total expenses for one week’s exhibition, £7,533.72.

Philip served for two years when, in April 2007 at the Group’s AGM held in The Cello Factory, Susan Haire was elected as the Group’s third female president, the two others being Dorothy Mead (1971 – 73) and Philippa Beale (1995 – 98). In her inaugural speech Susan flagged her intention of reinstating the open submission process which had been in abeyance since 1996 and in December “The London Group Open 2007” took place in two parts at the Menier Gallery. January 2009 was the first time The Cello Factory was used as the venue for a London Group exhibition, a Small Group Exhibition organised by Clive Burton and Bill Watson (who were also the organisers of this year’s “Coming up for Air” in St. John’s churchyard). The Cello Factory was the London home of Susan Haire and her husband Frank Hinks who for many years following offered so generously the beautiful exhibition space in Waterloo for nothing, saving The London Group thousands of pounds in hire fees and other expenses.

2013 rang in our 100th anniversary duly celebrated with many events, notably a reception at the Café Royal, a party at Tate Britain and the publication of the Group’s history from 1913 to 2013. The London Group collaborated with Ben Uri in their “Uproar: The First Fifty Years” exhibition of past London Group members accompanied by a substantial publication and was one of their most popular exhibitions. The year continued with exhibitions at Pitzhanger Gallery, Ealing and Mottisfont, a National Trust property in Romsey, Hampshire culminating in two exhibitions at The Cello Factory; “The Centenary Open 2013” in two parts during May and June and “+100: The London Group Today”, a Full Group Exhibition during November and December.

Hardly gathering breath Susan steered the Group through a programme of bi-annual open exhibitions and raising the Group’s profile with artists’ talks, concerts and salons. She established “The President’s Prize” in the Opens offering an exhibition in The Cello Factory for, usually, three lucky winners, many of the recipients then going on to be elected as a full member of the Group. Similarly, Susan opened up the Waterloo space for individual Group members to hold solo exhibitions. For most of the existence of the Group there have been one or two exhibitions a year but there were around 60 London Group exhibitions under Susan’s leadership, a record number by a long way for a London Group president. Peter Clossick comes next with 27 (18 of which were at the Walk Gallery) and Claude Rogers with 17.

Of course it should not be forgotten that every member of The London Group is a practicing artist in their own right, and Susan’s work has developed from a traditional painting into embracing new technologies and materials, a journey many London Group members can identify with in their own output.

Late in 2020 Susan became the Group’s longest serving president beating Stan Smith’s fourteen years (1979 – 1993) and Claude Rogers’ thirteen years (1952 – 1965). Many, many congratulations and heartfelt thanks to Susan and Frank for all they have done to lift The London Group into being one of today’s most prominent artists’ collective.


For those who enjoy detailed statistics

Susan is the longest serving London Group President both officially and unofficially. The previous president with that attribute was Stan Smith who was formally elected president at the AGM on 2nd July, 1979 having been acting president from ‘earlier in the year’ (no specific date) when Peter Donnelly resigned. Stan stepped down at the AGM on 8th March, 1993 making him official president for 13 years, 8 months and 1 week. Susan was elected at the AGM on 17th April, 2007 and stepped down on 5th August, 2021 making her president for 14 years, 3 months and 19 days. She became the longest-serving officially elected president on 24th December, 2020 but by late June 2021 at the latest she had become the longest-serving president both officially and unofficially taking into account that Stan could have become acting president up to six months before he was elected.

Stan’s presidency was interrupted due to Dennis Creffield being elected president at the AGM in 1983, as is expounded on in London Group archivist David Redfern’s article Tales of the Presidency. Stan was suddenly taken ill and could not chair this AGM held on 17th June, 1983 so Vice-President John Bellany took the chair. Gill Ingham recalls that it was a very uncomfortable meeting with quite a lot of aggressive feelings being expressed. When it came to the election of officers it was a genuine surprise to discover that Dennis had been elected over Stan. This was a shock to Gill who had assumed Stan would be continuing, as much work had been done in preparation for the forthcoming exhibition ‘London Group 84. Open Exhibition RCA’ at the Royal College of Art. Secretary Joan Strickland was so upset that she walked out and resigned. John Bellany did his best to restore order to the meeting by saying “look here we are all reasonable people and good artists here”! There are no recorded minutes of this meeting. An extraordinary meeting was convened on 5th November, 1983 following Dennis’ resignation and to deal with the confusion of the previous meeting. Stan Smith, who had (yet again) been acting president was duly re-elected, therefore, because of this ‘gap’, Stan’s tenure could legitimately be reduced by some 4 months and 2 weeks.

Speeches given at the Handover Celebrations, 5 Aug 2021 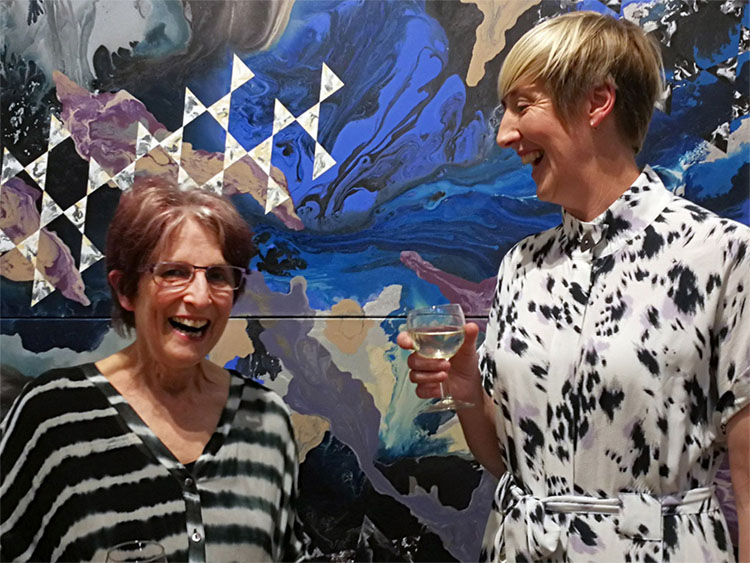