In the time of limited travel, how nice to take a journey with Sumi Perera LG to a few of her many residencies.

A loaded word for me, a bimodal émigré of dual nationality who has lived on the edge of uncertainty. I have occupied a liminal space both geographically in the UK (my adopted home, during a civil war in my native country Sri Lanka) and also professionally (as a doctor,  ►  full-time trailing-spouse/mother  ►  scientist  ►  full-time trailing-spouse/mother  ►  artist). Professional suicide as some may think…

Perhaps this is why I embrace the excitement of artist residencies, which allow me time to reflect, discover and create new work. The unknown, the cross-pollination of culture, the transfer of skills between myself and fellow artists, informs my practice. I embrace the opportunity to teach, learn, collaborate, network & make site-specific work.

I merge architectural blueprints with cartographic references & as a deeply materials-based practitioner, use substances harvested from each site. I mix traditional & contemporary skills to make multimodular work, that contract & expand to fit any dimension/shape/form. I record sounds & make interactive installations that mutate in colour/opacity. I take rubbings & make paper casts of surfaces of surroundings.

I grew up in small islands, lived the longest in a house between the sea & river which probably explains my engagement with the geographic waters of each residency I undertake…

The 1st was a Teaching Residency in 2007 at the Central Academy of Fine Art, Beijing, China.

I taught an Artistbook Module to postgraduate students (mostly from one-child policy families)–MA Graphic Design/Visual Communications department, heavily involved in designing for the Beijing Olympics ‘08. I was subsequently sent their work for assessment, which was eventually gifted to me! As a gesture of goodwill/gratitude, I curated a series of exhibitions of this work titled 15 to 1 that was shown in 12 international venues: Fabulous Books, Fantastic Places.

It was my first visit to China, I was taken around & shown the thriving contemporary Art-District 798 & the UCCA Centre which transformed my preconceived notions of Chinese art & was more surprised when I returned in 2019. 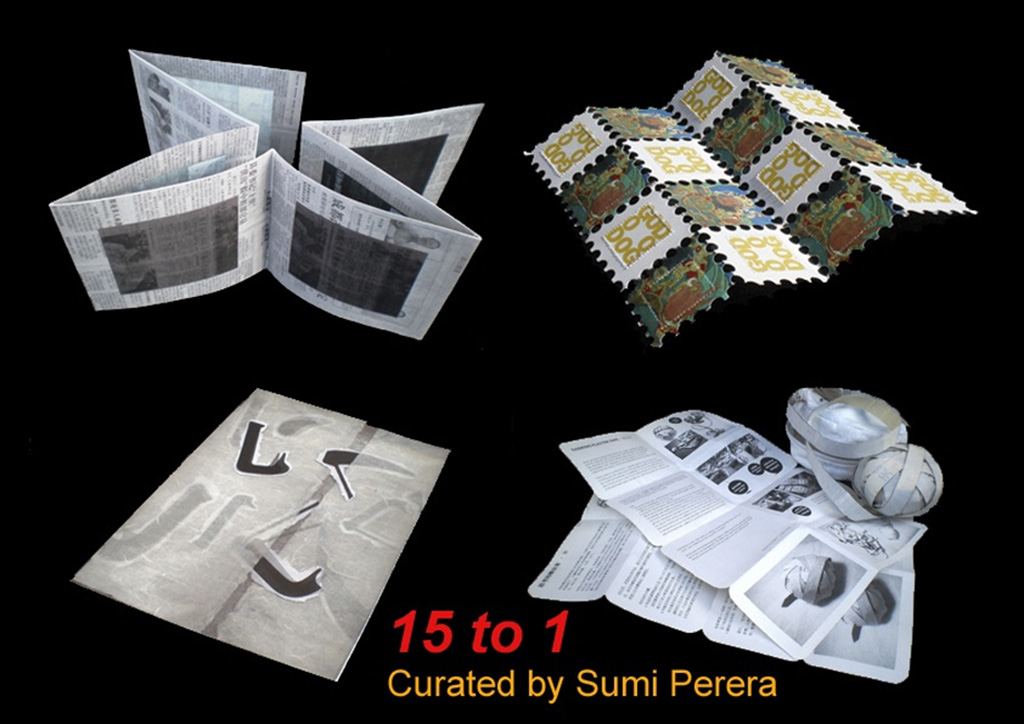 In 2015 I won the Flourish Award for Excellence in Printmaking, and had a solo Show at the Huddersfield Art Gallery: Liminal Spaces I and I have yet to take up the Artist Residency at the West Yorkshire Print Workshop, a Victorian School House in Mirfield UK.

The next Artist-in-Residency (AIR) was on home-grown territory: at the National Open Art (NOA) in London 2016. [NOA: UK’s leading independent art competition, open to amateur and professional artists in UK and Ireland].

I had been very fortunate to be shortlisted & exhibited at the Royal College of Art (2013) & the Science Museum, London(2014) prior to being the AIR.

I made work at Mercers’ Hall on the ‘Red Carpet’ during the Private View & the duration of the exhibition, which led to work being subsequently shown in Germany. The 6 week AIR in Venice in 2017 was the longest period I have spent outside of my native & adoptive countries & I consider Venice my third home (having visited since the 1990s) with few visits to both Art & Architecture Biennales. I was the 1st recipient of the Scuola Internazionale di Grafica (SIDG) Guest Artist Fellowship awarded to a member of the Royal Society of Painter Printmakers and had a Solo Exhibition Liminal Spaces II.

Based on John Ruskin’s Seven Lamps of Architecture and Stones of Venice. I collected stones, mud and sand from both my garden and Venice. Seven mezzotints of lamps, placed on a backdrop of monoprints and screenprints that lit up/switched off upon touch were designed with a nod to Ruskin and a wink to Martin Creed’s Turner Prize-winning work No: 227 [a light going on and off for 5 seconds within an empty room]. These mezzotints were laboriously executed celebrating the artisan qualities of printmaking. 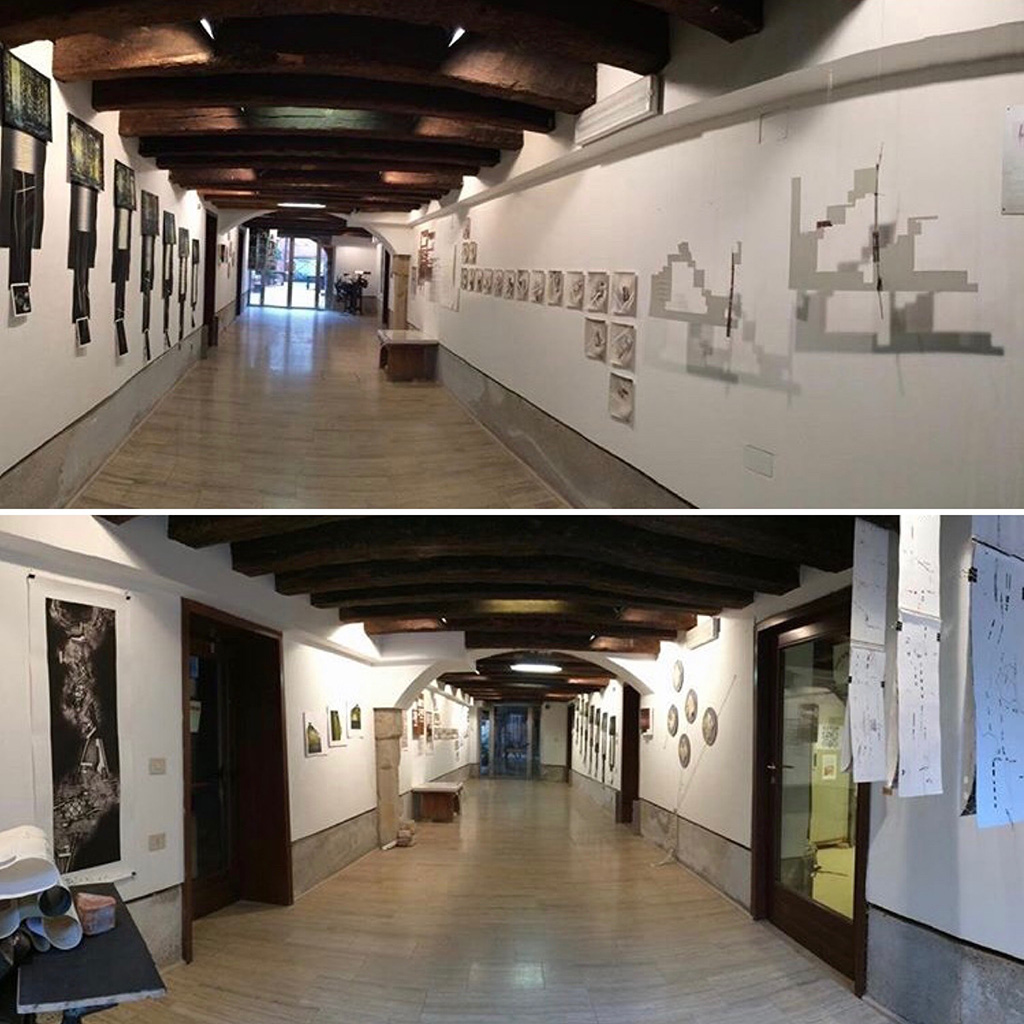 I had previously exhibited work at TEXT, an artistbook exhibition curated by Kestutis Vasiliunas (Lithuanian) at SIDG in 2010.  I took part in the Festival of Edible Books: Life is like a Box of Chocolates (inspired by line in the the film/book Forrest Gump by Winston Groom) of bread printed with chocolate, the architectural structure of pasta.

I also exhibited the Unbuilding Blocks Trilogy at Volumen, for the italian calligraphic group: Venetiae Incipit Scriptorium. As the acqua alta (high tide) sirens were sounded some of the prints were clipped up and others lengthened/lowered to capture and record the rising water.

The installation format (flipchart/portable books) I designed for the solo show was a tribute to the Venetian Aldus Manutius (circa1452-1515) a leading scholar/typographer (inventor of italic fonts and fore-runner of the paperback book: libelli portatiles = little portable folios ).

Some of these were exhibited for the John Ruskin Prize: Hand & Eye, Master of all Trades in the Age of Jack at the Millennium Gallery in Sheffield, celebrating Ruskin as a polymath.

A Stone Lithography residency at the Pierre Presse within a 9th Century Abbey in Marcilhac-sur-Cele, France was the next AIR. I arrived on the day of the French elections and while Brexit was a touchy subject, the context informed my work, as did the water turbines. It was an interesting mix of living & cooking meals with a group of Germans (Director & Master Printmakers). It was a surreal experience setting up a majestic vintage lithographic press and dismantling it in time for the Group Exhibition Saxa Loquuntur (The Stones Speak) at the end of the AIR. 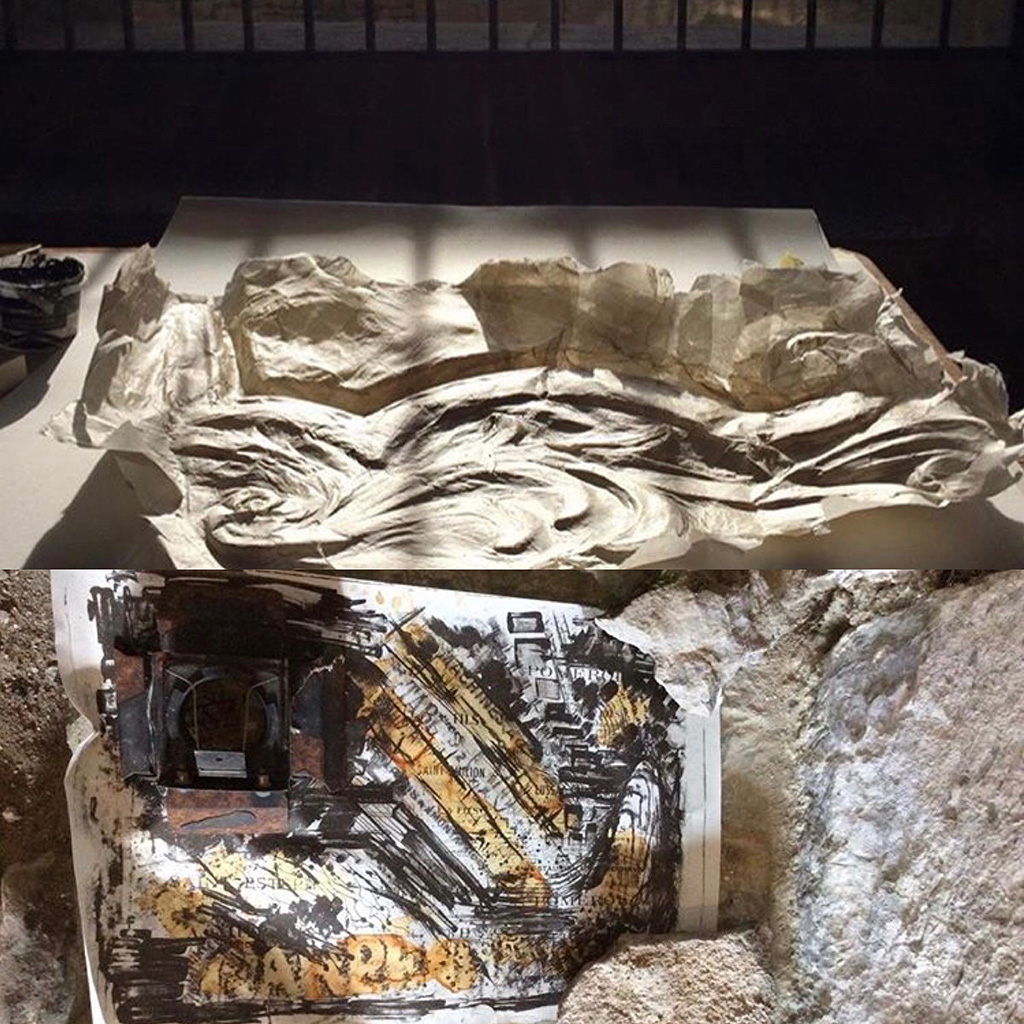 In 2017 I exhibited at the Sino-Anglo Dialogue in Yinchuan China, and returned in 2019 for a residency at the Artist Village close to the Mongolian border for the Sino-German Dialogue. We were given the best technical support & assistance to edition etchings & screenprints. The architectural masterpiece MoCA (where my work was shown) reflected the shifting patterns of the Yellow River which I incorporated into the etchings & screenprints I editioned. It led to Feeling the Blues Series shown at the London Group Open-Part1 & is currently in Australia at the 40th Anniversary Screen on Paper online exhibition.

I returned to the UK in October 2019, leaving behind many ongoing collaborations to continue… 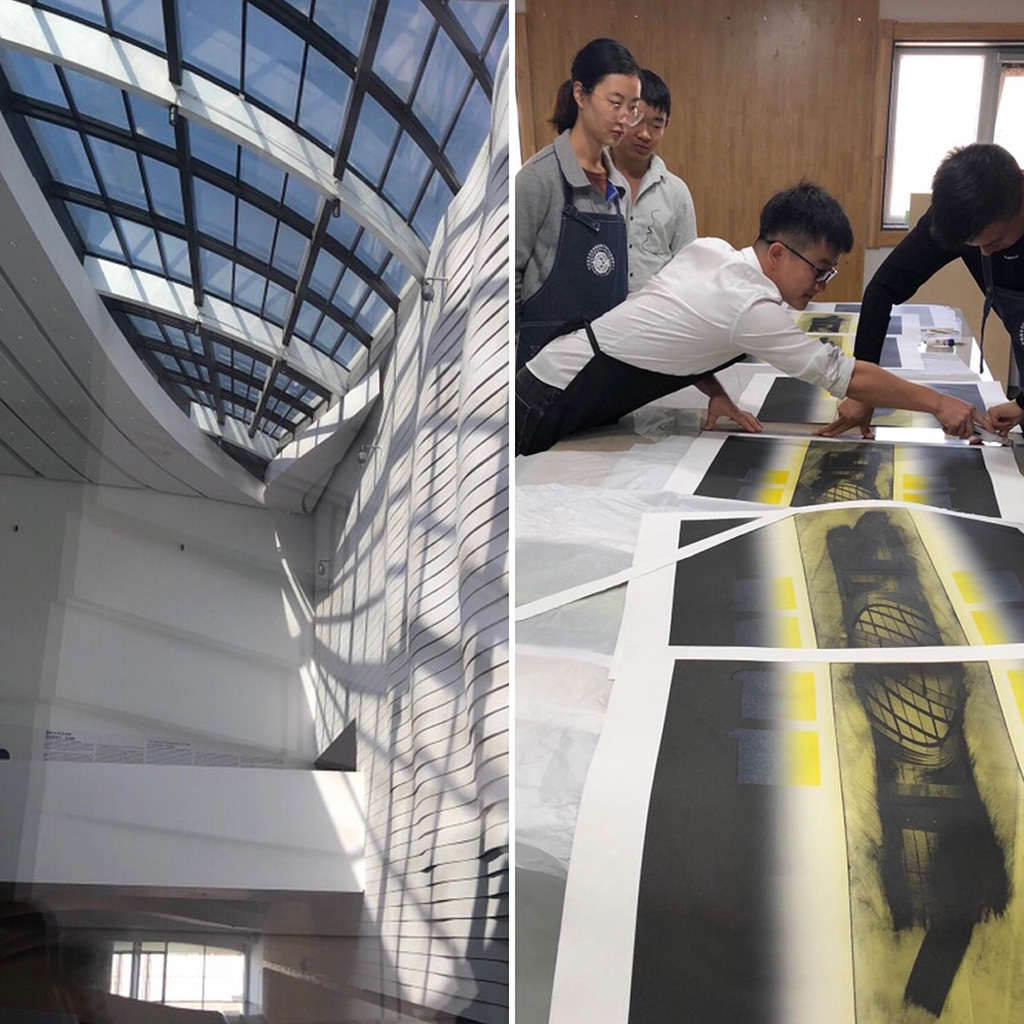