In our latest collaborative article, the Group responds to “Spring”

At the beginning of their new year Maori elders watched the eastern horizon at dawn for the rising of Matariki, the Pleiades star formation which heralded spring and the signal to plant their first crops. If the stars were steady and bright it would be a good season, but if they shimmered and were dull that was a bad omen. Kites were seen as a way to connect with the stars, so I made this kite in the shape of the Pleiades, known in the West as the Seven Sisters. And no, it doesn’t fly.

“Vernal showers bring May flowers”, which is appropriate for my having been born in May, but named Martin, from the Latin Martinus derived from the Roman god Mars, the god of war.

Flowers and war seem two opposite ends of the spectrum. This brings to mind the flowers placed in the barrels of soldiers’ rifles during the anti-Vietnam war protests – a powerful image of peace overcoming war. Appropriate today as Spring approaches and Russia has now invaded Ukraine, which means death and destruction. The very opposite of Spring, which is re-birth, spring lambs, the Vernal Equinox. Bringing us face to face with the metaphysical contradictions of our existence. I feel for the Ukrainian people and the suffering they must be going through during a time when the birds start singing, the trees blossom and newness erupts, but not for them. 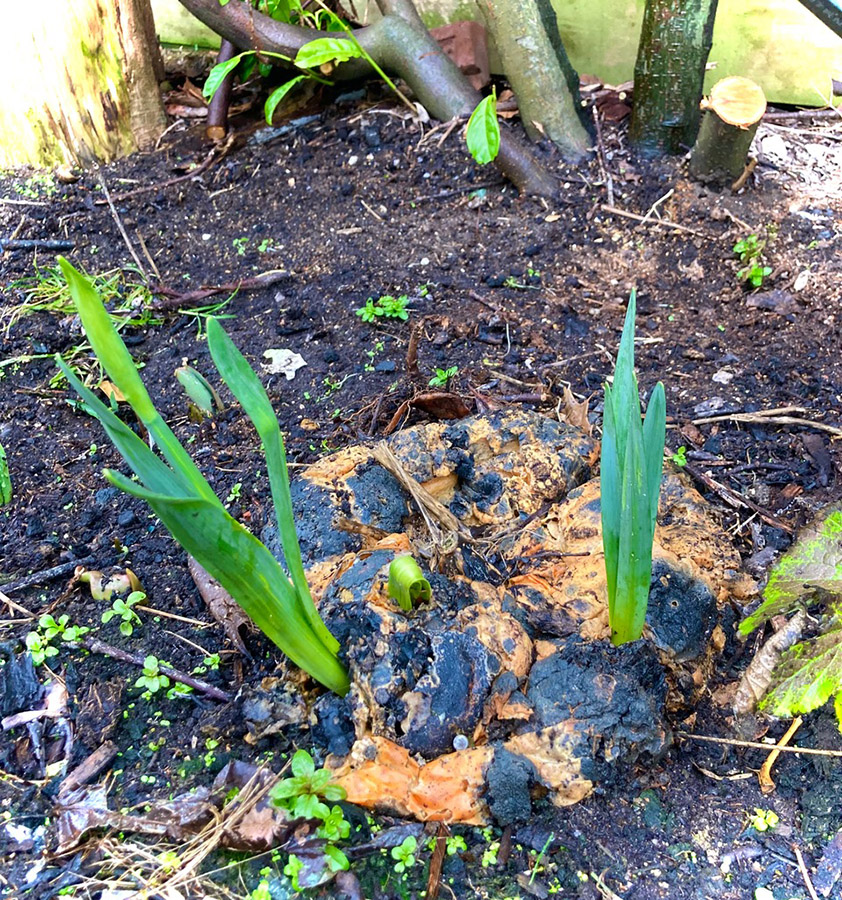 This is an image from my garden which to me perfectly illustrates the regeneration of the season. Last year’s pumpkin feeding this year’s bulbs. Undeniable regeneration. 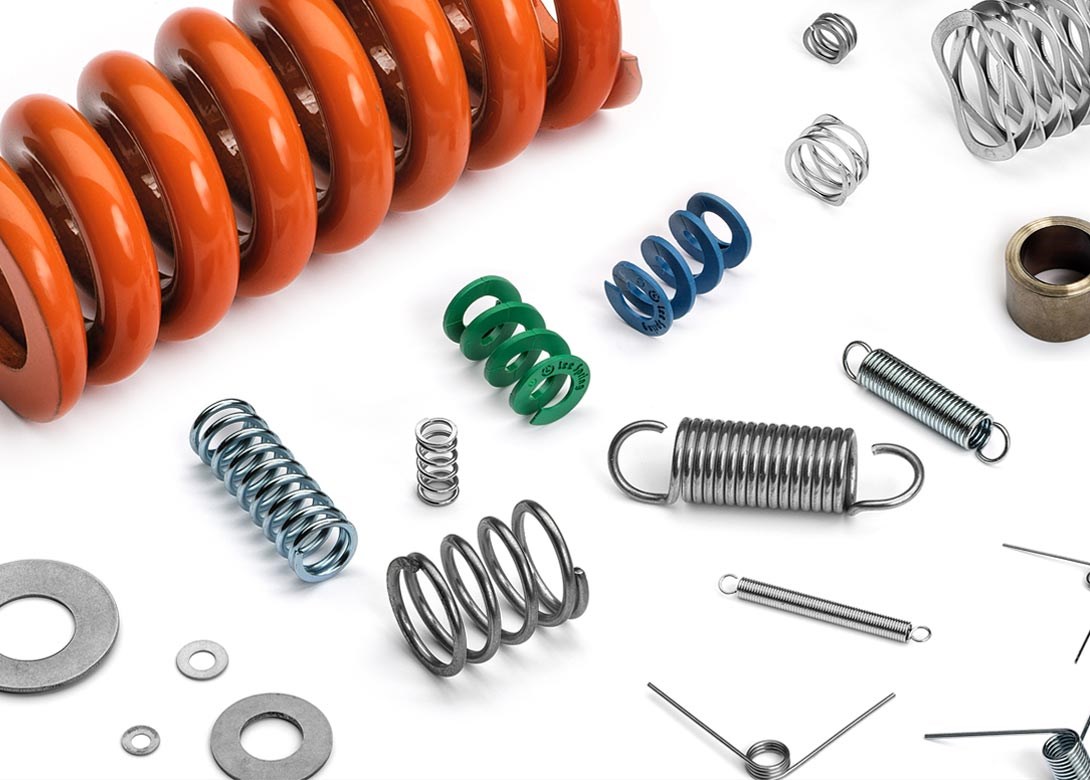 What is the relationship between the season known as Spring, and spring, defined as ‘an elastic device, typically a helical metal coil, that can be pressed or pulled but returns to its former shape when released’? Both have to do with things bouncing back. The implied dynamics have long interested me, in both the literal sense, because elasticity is fundamental to how entities operate in relationship to others, and second, in the cybernetic connotations. The push-pull, give-take, feedback loops inherent to biological and other mechanisms, arguably amounts to a definition of life or intelligence. Some call it ‘truth to materials.’

The arrival of Spring heralds in feelings of renewed hope and delight as I witness the coming of new life all around me. Firstly, the light and colour as the desolate winter transforms nature into bud and new life. I try to respond not just visually to these things but aurally too. Sound and forms merging ,I hope, into new work. This seems even more crucial as we march towards climate crisis : to bear witness. 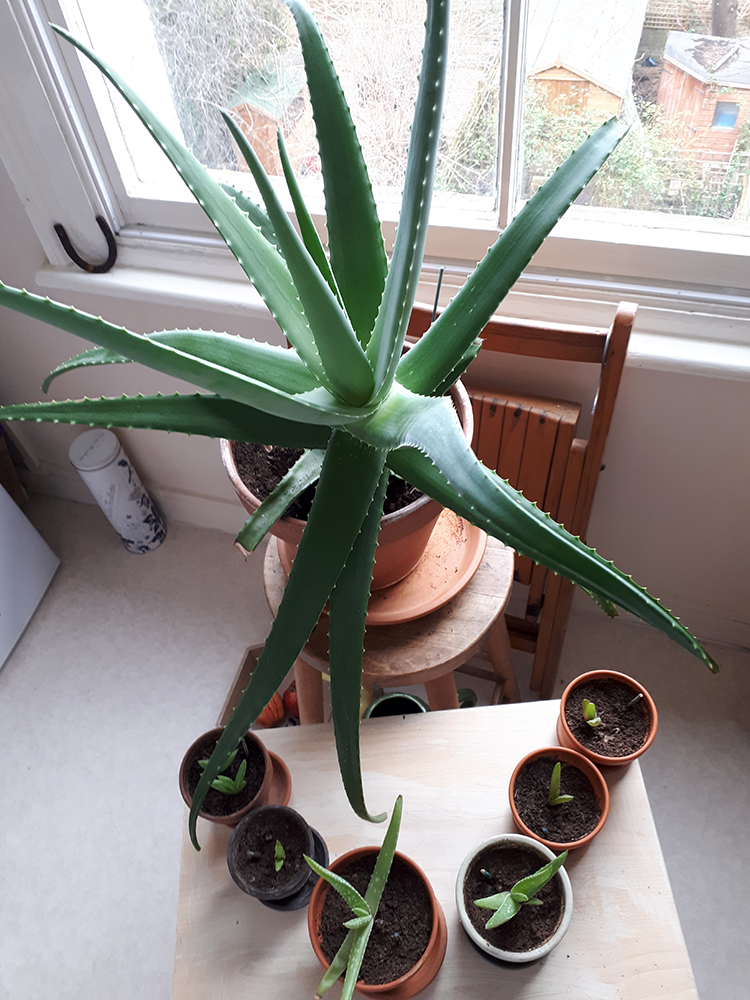 A permanent resident of my kitchen is my Aloe Vera a.k.a the Mothership seen here with her recent satellite additions – Grown from a small cutting donated by a friend about 8 years ago and now with a wing-span approaching one metre; just quietly grew & grew – And then suddenly during 2021, many new small pots were required.

Usually watered amply about once a month; I read that cacti or succulent plants prefer the equivalent of an infrequent & sudden desert downpour rather than frequent small showers.

Likes a lot of light, but has no direct sunlight.

Am secretly hoping that the newbies cease for a while as fast running out of places to put them – In this way, the Mothership has come full circle as that’s how she arrived with me originally. 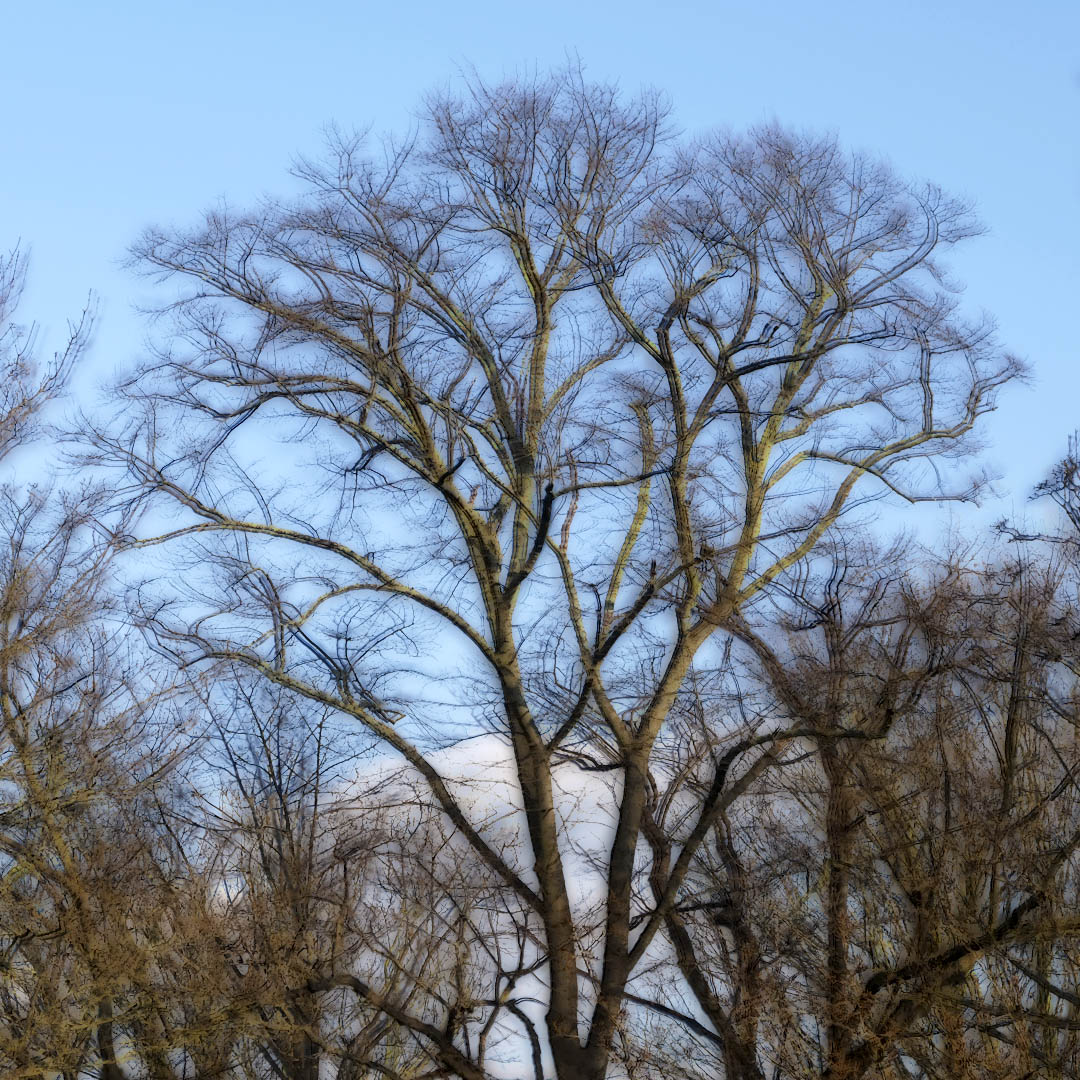 Spring, also known as springtime, is one of the four temperate seasons, succeeding winter and preceding summer. Spring always starts on the 1st March and ends on the 31st May. Spring is considered the season of new Beginnings! I always think that it is a time when the earth seems to come to life again. I have attached an image of one of my Grid Paintings titled; The submersion of experience Blue. The reason for selecting this artwork is because it reminds me of spring – wonderful blues reminiscent of the bright sky or the movement / flowing water of the sea.

“And Spring arose on the Garden Fair,
Like the Spirit of Love felt everywhere,
And each flower and herb on Earth’s dark breast
rose from the dreams of its wintry rest”
Percy Bysshe Shelley The Sensitive Plant 1820

I called this painting ‘Secret Spring’. I was probably thinking of water. Later, I read ‘The Hidden Spring’ by Mark Holms, about the source of consciousness – the connection was sheer serendipity. He questions the primacy of the cortex. Eminently qualified as a neurologist and psychoanalyst, his message for painting – as I understand it – would reinstate Freud’s theory: the paradox that awareness depends on unconscious processing, on feelings, as much as on supposedly objective perception. Perhaps that puts the skids under realism. It makes me trust my hunches, what can’t be instantly explained. 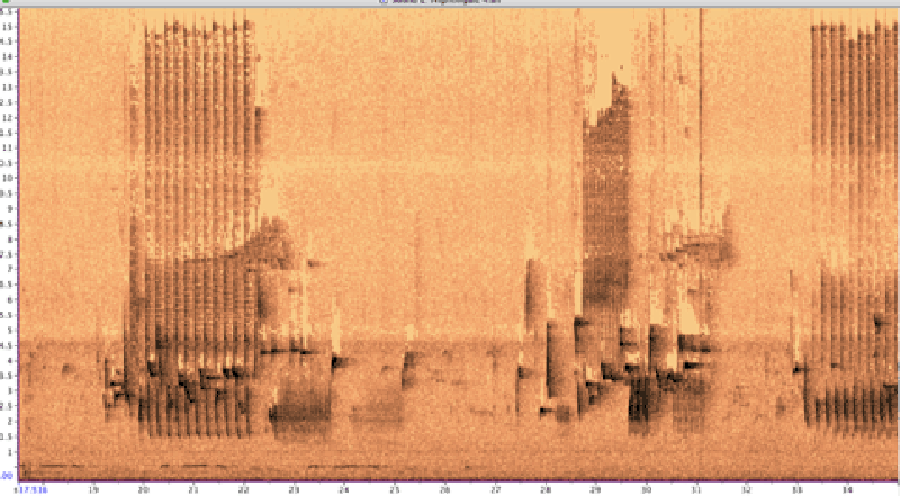 Visually vibrating in bright greens, yellows, juxtapositions of tiny blues and white, flecks of red, a world in miniature at each glance. Busy with sound, insects, birds, flights, movement and arrivals, building future projects.
In short, Hope.
This is the time when we are most in love with nature, most in awe when we bathe in it and bother to notice it.
How to capture all that? Damien Hirst’s cherry blossoms or Van Gogh’s?
I know what I would choose.

Feeling suitably honoured, the Spring forgave the Rain and granted it intimate favours where upon Rain abandoned it and even denied the existence of Spring.

The Spring sobbed bitterly shuddering and gasping with the gusts of wind and cold on that bitter and gray wintry day.

A week later as the Rain passed by, Spring whispered it a secret.

It told Rain the truth about Spring : for every Spring there is another one beyond, another more beautiful and potent.

From that day forward the Rain has never been satisfied with just one Spring; always seeking the one beyond.

Now the Spring comes and goes as it pleases ! 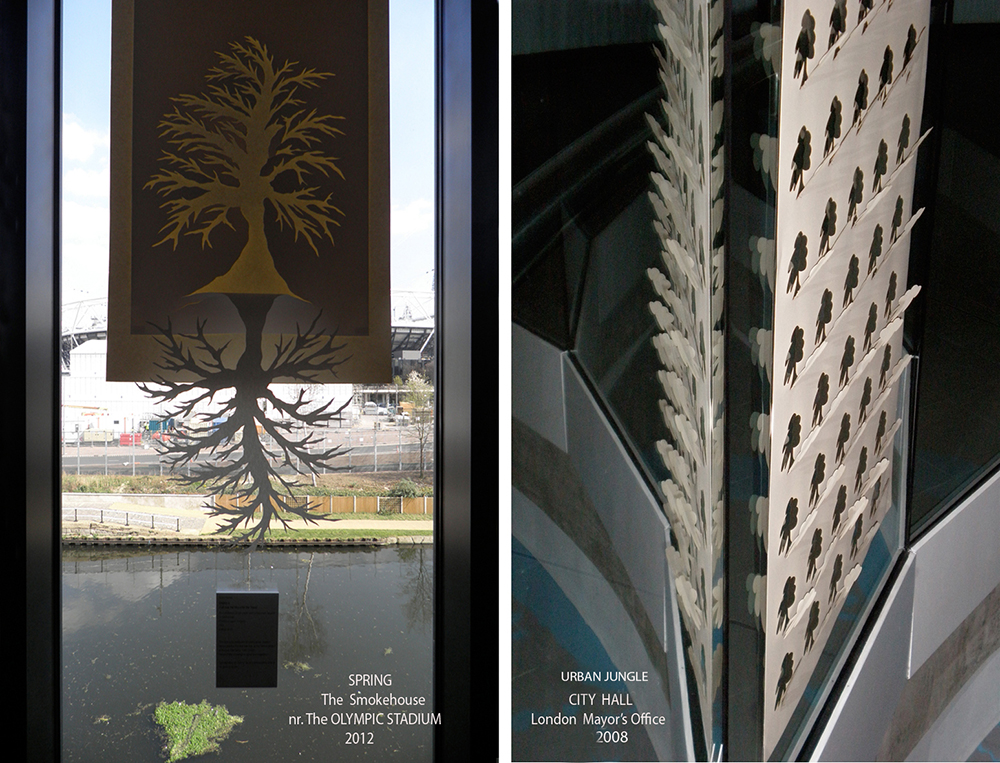 SPRING signifies the renewal of life.
Two bodies of work titled X OAKS[X] I & II were exhibited at:
1. SPRING shown a decade ago, at the Smokehouse opposite the Olympic Stadium, London in 2012. A handcut paper installation of a series of trees, cut and flipped over to represent its roots.
2. URBAN JUNGLE at the CITY HALL, the London Mayor’s Office in 2008. A laser-cut installation of trees.
Both were a tribute to Joseph Beuys and his intervention/social sculpture 7000 oaks at Documenta 7 in 1982.
Viewers were invited to remove/take-away a tree from my installation, leaving a pledge to plant another. https://publicdelivery.org/joseph-beuys-7000-oaks/

The light in an English spring is now upon us. Grey dark clouds, rain sluicing down across Trafalgar Sq last Friday night with a high rainbow yet light bright and lemon gold irradiated all of Pall Mall and turned the St Martins in the Fields lemon yellow. All who walked past had legs and feet reflected in the wet paving, humans four legs, dogs eight.

The bumble bees struggled out of grassy nests this morning in the Little Scrubs and flew around the cherry plum blossom. I have been making a copy, in oil of El Grecos “View of Toledo” which is in the Met NY but was lent to London years ago, when I drew it often, and got to know David Davies the El Greco curator and scholar as he found me drawing Spanish paintings. Thats a spring image with bright cold greens, Prussian blue and a violent storm breaking over the city.
Recently I heard that Davies, in his youth a middle weight boxer representing Wales had died. Brought up in the Welsh valleys, he helped set up the University College Art History Dept. A mild, thoughtful man who greatly inspired and influenced, me and many others who had the good fortune to study with him.
1937-2022 are his dates 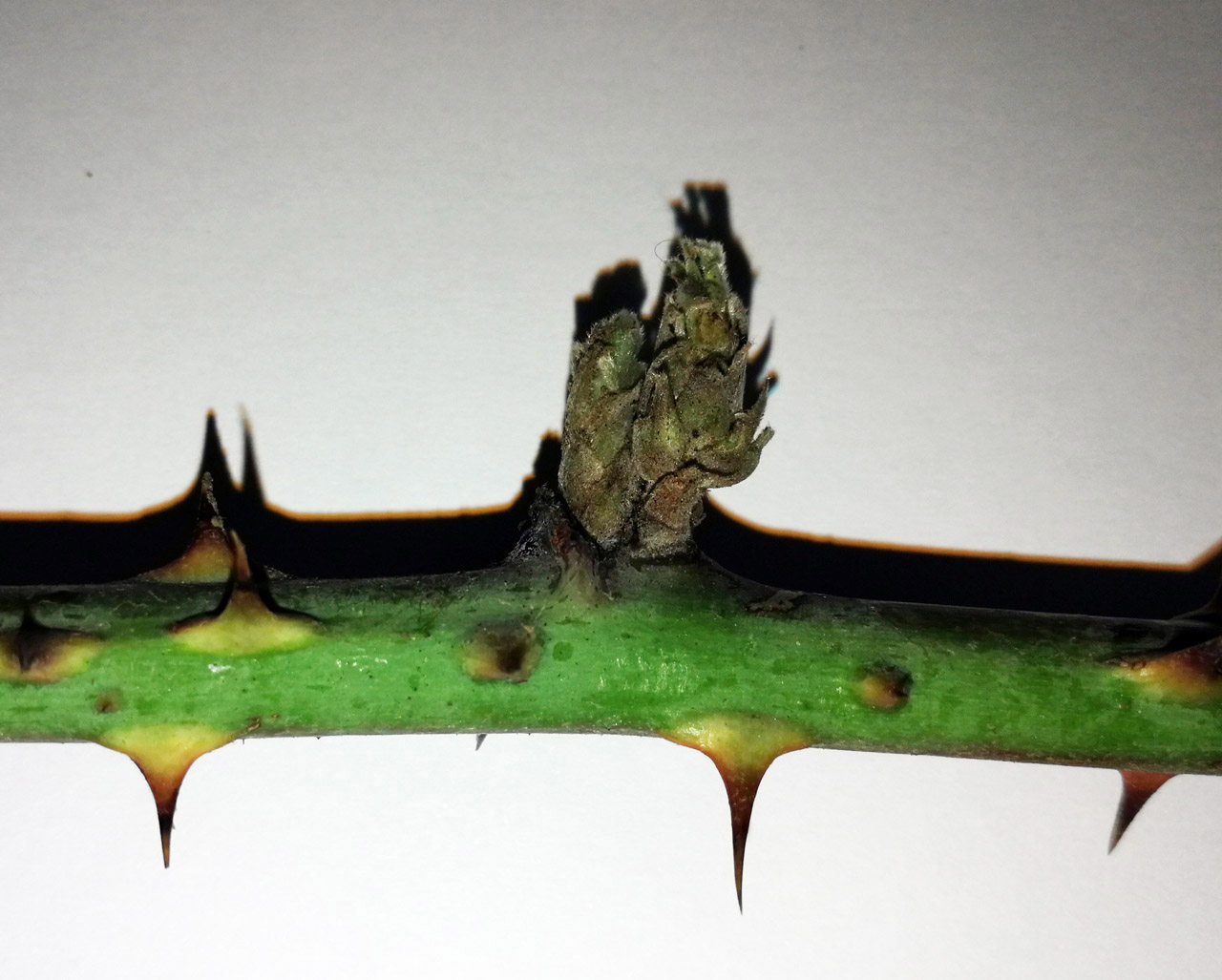 “…looking forward to getting stuck in again” I said to Robbie, the Allotment Manager, this morning.

We’ve rented our plot for just over a year. For much of that time we’ve been taming it, so this is our first Spring where we know roughly what we are doing. We know what will grow well where, what insects, rusts and blights to expect, and what the pigeons, mice and rats will devour given half a chance. Over the course of the year, we knew there would be varying yields, crop failures and contingencies. What was more of a surprise was just how much pleasure we would get from physical labour. The process of putting tiny seeds into tiny holes in tiny pots and then transplanting them into the ground to grow into large leafy things has been enchanting. It has also made us aware of how algorithmic plants are. If the seed is dark and warm and wet, begin germination. If there is a burst of warm weather, then bolt. If the Sun is over there, then stretch the cells on the opposite side of the stem to bend toward it. If there is a pole nearby, wrap yourself around it. You can rely on plants to do their thing.

Indeed there’s a whole branch of computer art dedicated to the algorithmic beauty of plants. Fractal trees, Lindenmayer systems, the Barnsley Fern, which we are beginning to explore. Systems in which every tiny detail is mathematically accounted for. Simulations so ‘on it’ they leave no doubt that Nature is doing some sort of maths, and yet there is something else. Take the bramble, this shocking, aggressive, out of control, fast-growing plant, with metres of thorns, spikes, and what’s that? Buds, we never noticed the buds before.

Spring is the scented bell reminding me to sort through my seed collection ready for this year’s allotment planting. Spring sunlight gently persuades me to close my eyes and listen to the bird song. Spring sends out subversive shoots which dare to occupy wire fences and empty walls.

I was lucky enough to have two magpies building a nest at my eye level just outside our kitchen window, in our second floor London flat.
I have found it so fascinating to see how tirelessly they both work as a pair sharing the work. I learnt that magpies mate for life.
The nest grew steadily larger and is now shaped like a cone, so they have a roof and almost completely disappear when inside it.
Now the blossom is out they have an additional layer of privacy.
A helpful reminder of the importance of relationships, life, energy and new beginnings.

…To Spring (Or Not To…)…
…maybe in making-for-art we suspend (without a thought) our routine use of ‘spring’ as a noun (without a definable ‘object’) and re-site it as a verb… for doesn’t such making-for demand a dancing leap out of the everyday towards art’s unknowable elsewhere regions? Think Kafka’s destination (‘away-from-here’): he needs to vault onto his horse and, in leaping up and away, make an assault on the languages ceaselessly pinning him down… only to fall back soon enough into the present’s miry leas… where Picasso’s ‘saltimbanques’, await their next saltation (a possible saltus mortalis… death defying leap) with a slight smile (remarked by Rilke in his 5th Duino Elegy as ‘subrisio saltat.’ – the leaping dancer’s smile) …
…and perhaps the ridiculous sublime of James Thurber’s spare cartoon lines echo springing’s strangeness still now in the darkening days of omicronic-disaster-gardening’s storm-wracked (thanks to the Arwen-Barra-Corrie-EUnice-Dudley combine) landescapes… painful delight…a wryly self-directed schadenfreude even…