Walter Sickert, was a great painter and great character, witty and combative and has been an influence on British art since the early 20th century. He was involved in many exhibiting groups including the new English art club 1886, the Fitzroy Street group 1907, the Allied Artists Association 1908, the Camden town group 1911 and he chaired the first meeting of the London Group in 1913. He was also a prolific writer, teacher and art critic as well as an artist taking a radically modern approach to painting.

Born in Munich in 1860, he became apprenticed as an assistant to Whistler after he spent a brief time at the Slade School of Art in 1882. He learned to prepare Whistler’s palette for sketching trips and Sickert’s early works are greatly influenced by Whistler’s muted tones and close reliance on the process. Degas became Sickert’s mentor in 1885, inspiring him to use bolder colours and paint from drawings which he squared up rather than painting directly from the subject. Previously Sickert had pursued a career as an actor and understanding Sickert it has to be remembered that he was an actor in his early life and he never forgot the theatre. He liked the dramatic moment and enjoyed creating them. During his time in a class-ridden period of Edwardian life, Sickert was breaking rules and crossing the boundaries with his social realism. This did not go down well with the British establishment and still does not if you read the current reviews.

It is so unusual today to visit a major exhibition of figurative painting. We are in a post-Sickert period, just as we are all now post-modern. He’s not remembered by some but has been an influence on many artists. A bridge between France and those in the UK who wished to be relevant artists in the early years of the twentieth century. Today younger artists would consider him to be in the background, anachronistic and the demographic of visitors to the exhibition is probably more baby boomer generation, or Gen Y & X rather than Gen Z. Today’s tabloid headlines depict him as “a foggy panorama of Victorian dirt & vice”, “serial killer”, “dirty, upsetting”, all that should attract the crowds. Nonsense reviews are nonsense, especially the Guardian art critic linking Sickert’s paintings with syphilis and Jack the Ripper, maybe he needs to re-examine his own alter ego.

What first struck me visiting Walter Sickert’s exhibition at Tate Britain were the small works. Today we often believe that bigger is better rather than being on a domestic scale. The rest of the exhibition was similar, generally small size paintings until you reached the final few rooms where the works became bigger, bolder, and brighter.

The early works have tenebrism, putting dark against light, but what is so admirable throughout the exhibition is the perfect tonal pitch of the colours that he used. Also, his use of rough, tactile, textural, workmanlike surfaces with dry brush marks especially in the later Camden Town works.

Plus the thorough grasp and use of scale on a two-dimensional painting and superb draughtsmanship. As you go through the show you become increasingly aware of the abstract mark-making where nothing is wasted, surprising simplicity of articulation with figures and overriding of detail toward the mass, with a flash of colour. All the works appear to start with a ground colour which he then paints into.

Sickert was au fait with the contemporary issues of his day although he had no theoretical axe to grind, unlike so much representational political art today. He refused to join in the party politics of painting. Early on Sickert realised the importance of cinema

and the dramatic effects of newspaper photography with the sense of immediacy that they gave. His music hall paintings are full of life with unusual perspectives and a theatrical interplay between reflection and reality. But, working-class entertainment was considered to be an inappropriate subject matter in its day. 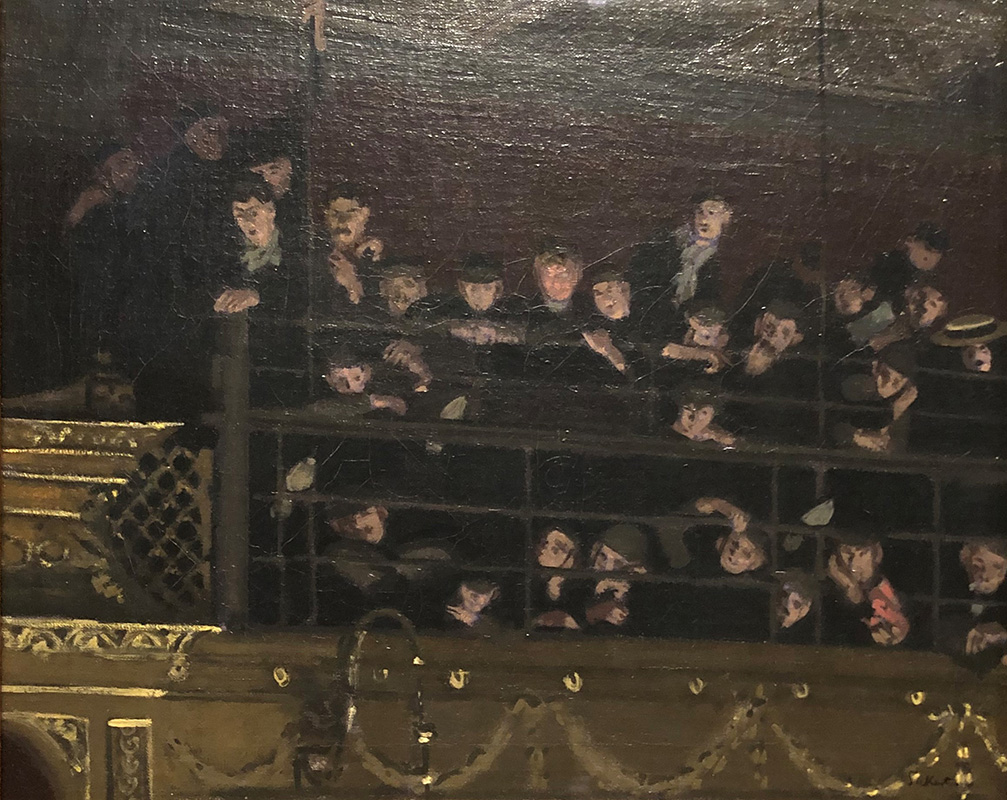 Paintings of the Old Bedford have a particular reminiscence for me as when the Old Bedford in Camden High Street closed in ’59 I remember exploring it with my brother when it was a derelict building.

In today’s climate of gender equality all want to see Sickert’s nude paintings hoping to be repulsed.

Sickert was against the academic nude and prefered the naked body of women in contemporary settings, images which can be found unsettling as they are realities of life and consequently objectify the subject. In their day they were disapproved of and considered immoral due to their unidealised bodies and they can appear voyeuristic. But their social realism greatly influenced later painters. Sickert says, ” …all great and sane art tends to present the aspect of life in the sort of proportions in which we are generally made aware of it…the chief source of pleasure in the aspect of the nude is that it is like a gleam – a gleam of light and warmth and life.”

Sickert was a shrewd marketer of his work and a deliberate strategist with his informal narratives. He was workmanlike, practical and innovative and pushed the boundaries of figuration toward the abstract with the plastic power of paint. This is a large historic exhibition and one which I would recommend seeing, as it will challenge and make you think of the details of life and the passing scene as it once was, I certainly came away encouraged by the thought that painting still has something to say in the 21st century.