Recent decades saw, firstly, during the neo-liberal period, the dominance of a Saatchi influenced aesthetic in Britain and beyond and then later, with financial crashes and a crisis for capitalism from 2007/08 onwards, the re-emergence of activistic practices and political art. For a long time we have been dealing with what one critic refers to as ‘post-art art’. The persistence of The London Group serves as a reminder that there are a range of different forces at work: some are arguably primal and underpin what art is, given its unexpected survival following a century of ‘deflation’.

I am not sure why I am saying all this but being joint winner of The London Group Open 2017 President’s Prize was a welcome opportunity for me to revisit these fundamentals and remind myself of why I worked so hard to become an artist in the first place. It was an opportunity to intervene in the way that I do into the technological and bureaucratic systems which surround us but to present physical, instead of more ephemeral digital or data-oriented, materials. In fact, after The Cello Factory exhibition – we called it Povera – had ended it dawned on me that, while on a ‘pre-foundation portfolio course’ two decades ago, I’d worked with an appropriated estate agent board (which is still stored in my studio). So my interest in accumulating these for Povera was not a completely new thing. It was stimulating to collaborate with Jockel Liess and Stephen Carley who work differently to me. We seemed to find a way of communicating which meant giving priority to the overall impact of the show, paying attention to what is interesting about, and also to the problematics of, The Cello Factory space, but allowing us to maintain our integrity within that.

Works without immediate obvious central connections, 1 space, 3 artists, 1 selector rigorous resolute plain: ‘Get on with it.’ We have 10 months roughly to work out why us. Thrown together. Prior unknown. Go on collaborate, make it work. What are the lines connecting the practices the works on first glance so little in common: ‘At least no one’s a Stuckist.’

Meeting talking email, constantly, periods of rest then more. 10 month to plan. To try to understand 2 others logic reasons decisions process mind thought practice. Who are you, what do you want, what do I want. What can I get, what can I make, how can this work. No one’s a prima donna. Instead mutual respect humor interest a title lots of admin some progress. It could work.

Space: High big white balcony wood black beams windows with blinds open or closing light moving up from the floor plan filling the ‘Void’ between the ‘Walkway’ and ‘Windows’. The Void. Visualize. Van loads full arriving. Or not select. Hanging density or sparseness with floating murder-words: Car-boot-sale. But we’re lucky the space is too big for even all we’ve brought.

‘The glitch’ was an irritating constant that simply had to be acknowledged. ‘Embrace the mistake’. That fucking radio has driven me mad this year… as I have said before, nothing is solid… The only thing it has been possible to do since dismantling POVERA has been to clear my studio of everything, repaint the walls and floor. I need to see clearly again.

I’m trying not to write about the ‘art’. To be honest I’m finding that difficult anyway. There is a cold nip in the air at the moment, a ‘nasty taste’ in the collective mouth. We named our show POVERA in full knowledge of its literal and metaphorical meaning. And it’s art history association. At least we realised POVERA was the Feminine…If that helps? Every time I travelled down to The Cello Factory during POVERA I passed a homeless guy in that dreadful underpass between Waterloo Station and the BFI. He had a mattress, a cardboard box with food in it, a dog and a clear plastic bag with spare clothes in it. The last time I went past his stuff was all over the place. It had been pissed on as well by the look of it. No homeless guy and no dog. I keep thinking FFS 2018. Is any of this stuff we make helping… I remember reading about Phillip Guston turning his back on Abstract Expressionism and producing those ‘awful’ drawings of Richard Nixon, ‘Poor Richard’. He couldn’t look himself in the mirror anymore and debate about the right blue or the most masculine gesture… I don’t know though – sometimes we can state the bleeding obvious… I took a photograph of the underpass carnage and ‘shared it’ on Twitter… but then realised I was just adding even more to the noise of ‘social media’.

In a sense, the tiny badges sum up POVERA for me… akin to the structure of a Haiku poem perhaps? The most inconspicuous and giveaway elements… almost worthless but eagerly pinned to lapels as the gallery goer exits the gift shop…

The work seems abstract. Non representational…
It isn’t. It has totally absorbed the past year.
Absolutely everything.

Povera was the third show prize I have awarded at The London Group Open and the last one in 2015 was also a three-person show. It was impressive how far those artists, Martin Heron, Cadi Froehlich and Darren Nesbitt, developed through their collaboration and so I was determined to select three artists in the 2017 Open whom I hoped would really spark each other off. And I’m excited to the extent that the prize-winners Jockel Liess, Micheál O’Connell (aka Mocksim) and Stephen Carley* did this.

It was a coincidence that all three of these artists use sound to a significant degree in their work and for Jockel, it’s the principle part of his practice and he is also a composer. In its constitution The London Group is defined as being made up of visual artists and our strapline echoes this so the Group is now breaking a boundary and this could be looked upon as a historic change. Seated around the table at Micheál, Stephen and Jockel’s first London Group Working Committee meeting we grappled with finding a suitable word to replace ‘visual’ but with no success and they concurred. Those present felt that ‘visual artists/arts’ in this context implies a meaning that goes beyond the actual definition. If you can think of a better word, please let us know!

Povera was a powerful show that presented an assertive stance. I am proud to be a catalyst for the change that it embodied for The London Group and for the part it played in helping ensure that the Group has a relevance in today’s art world. 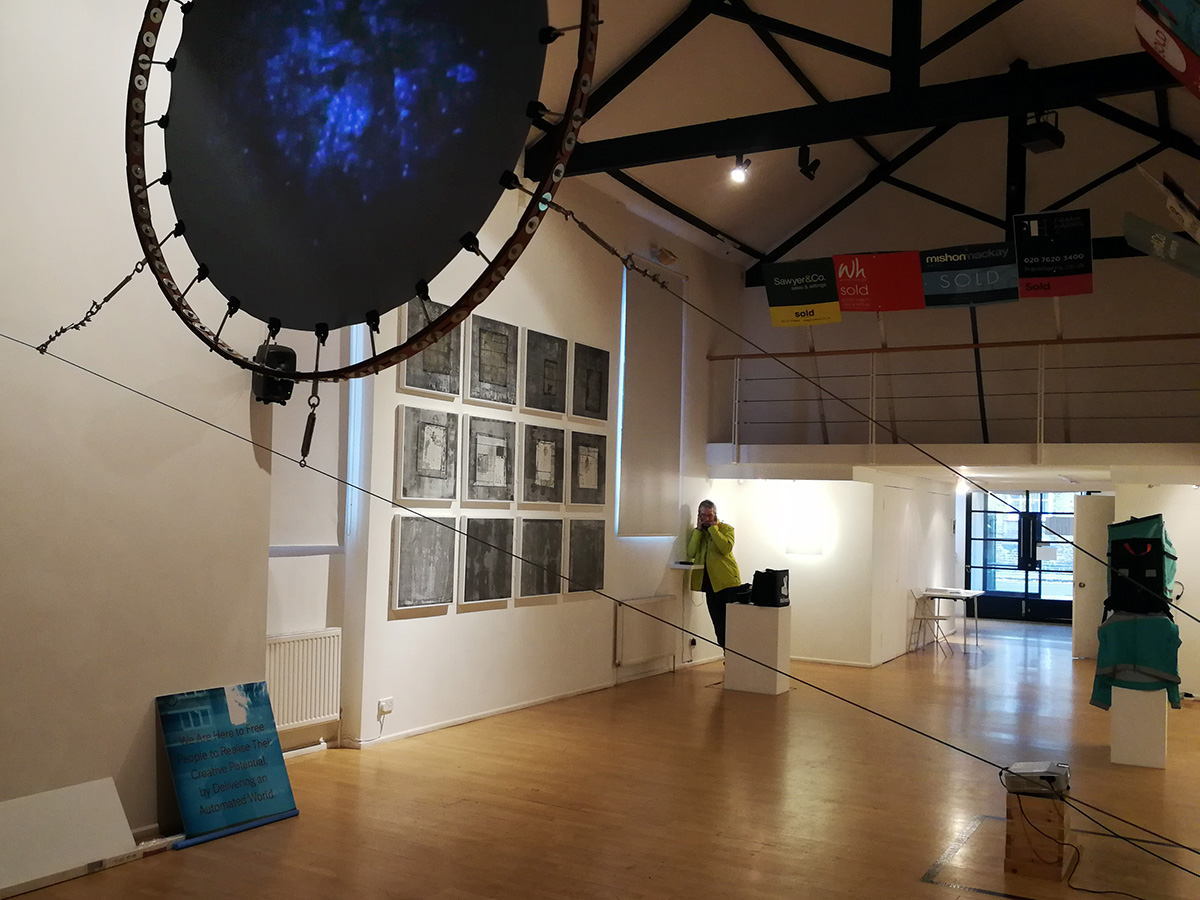 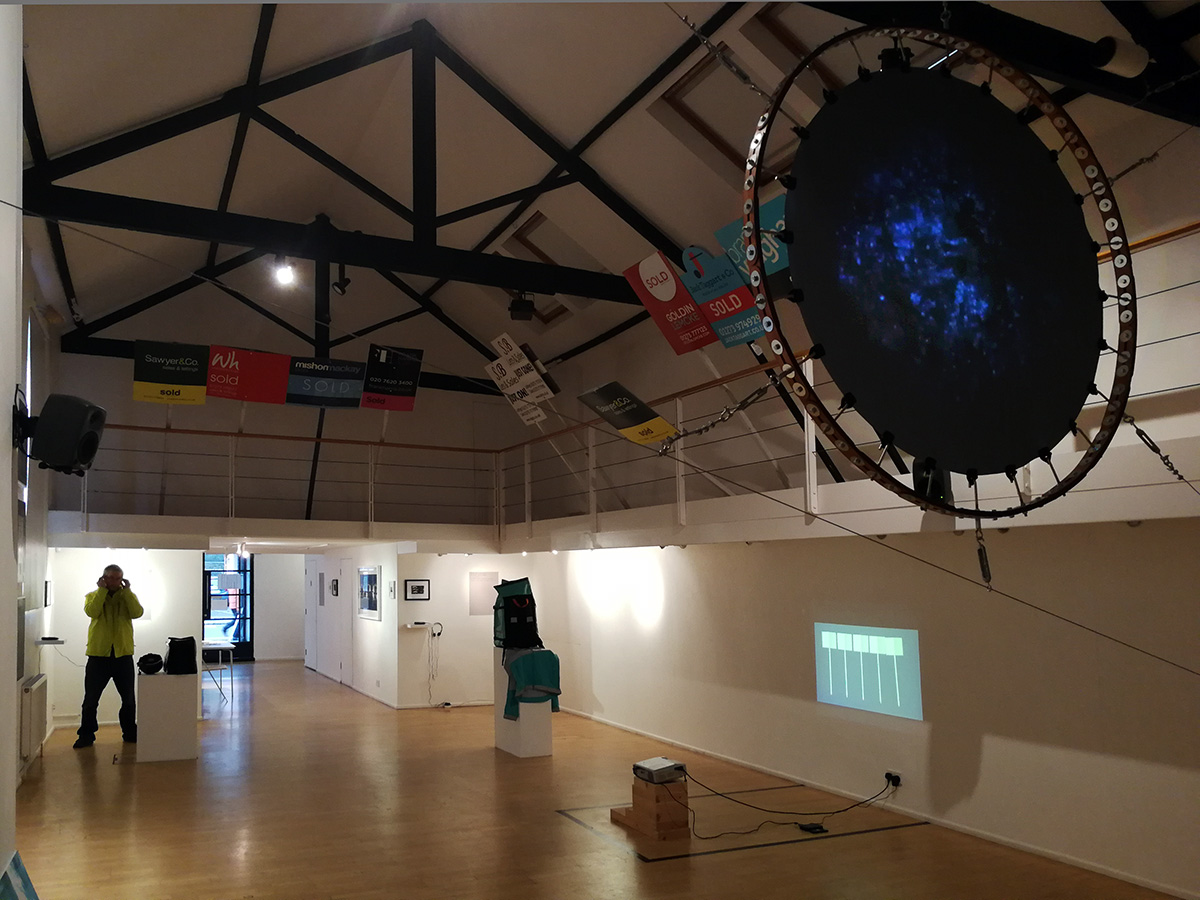 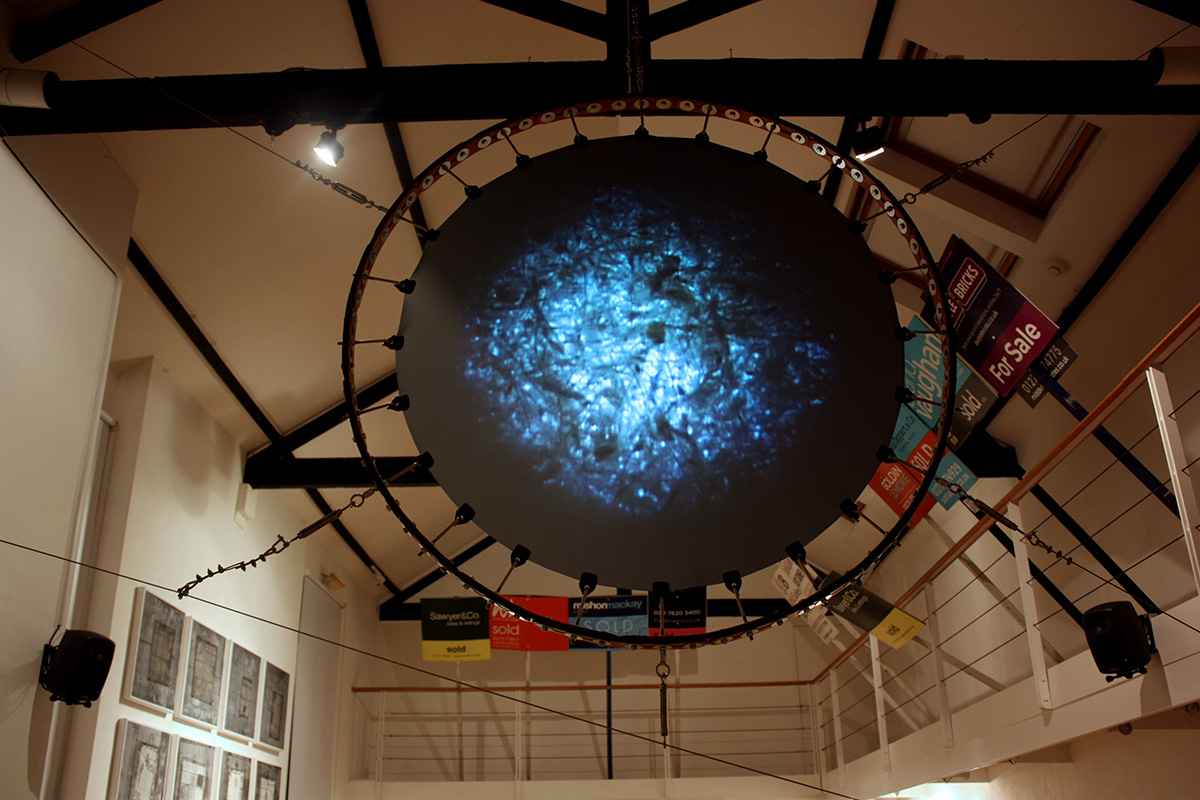 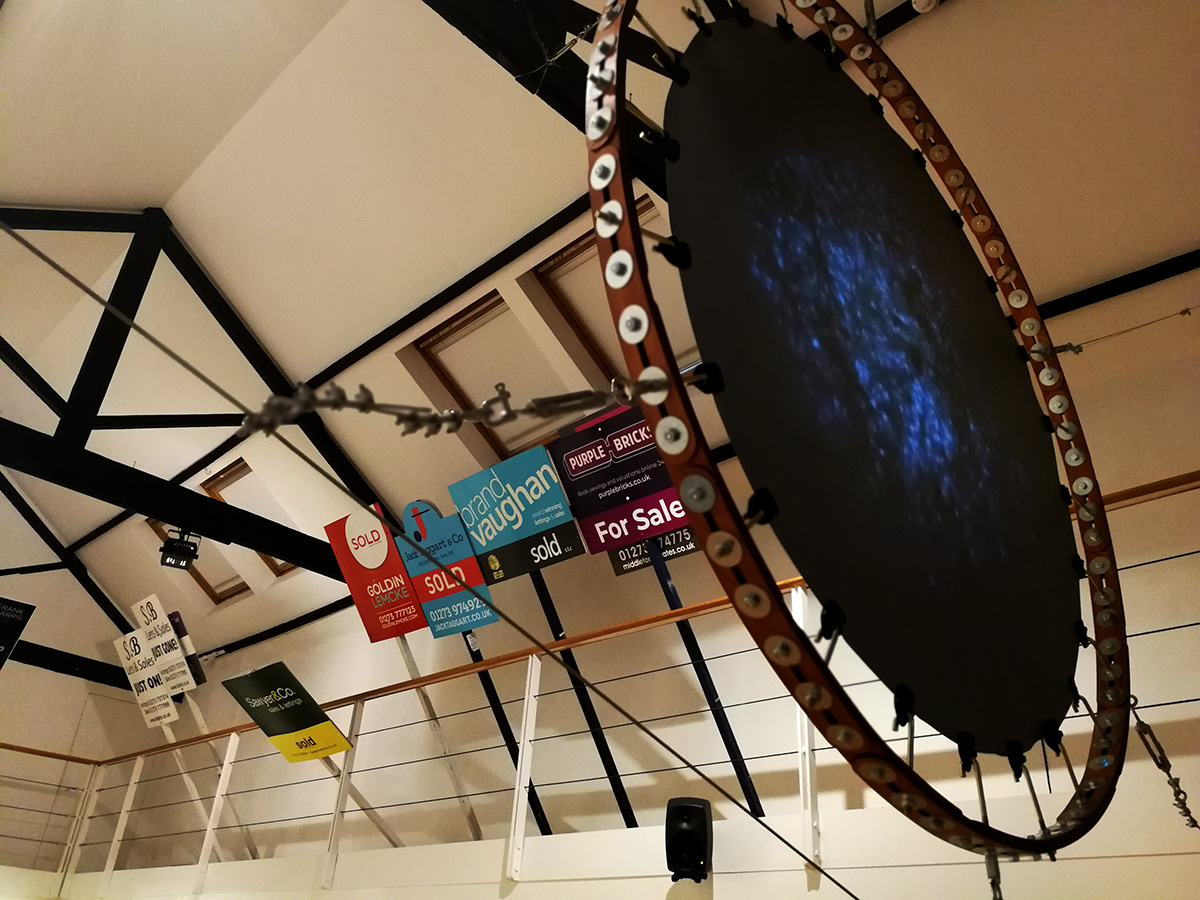 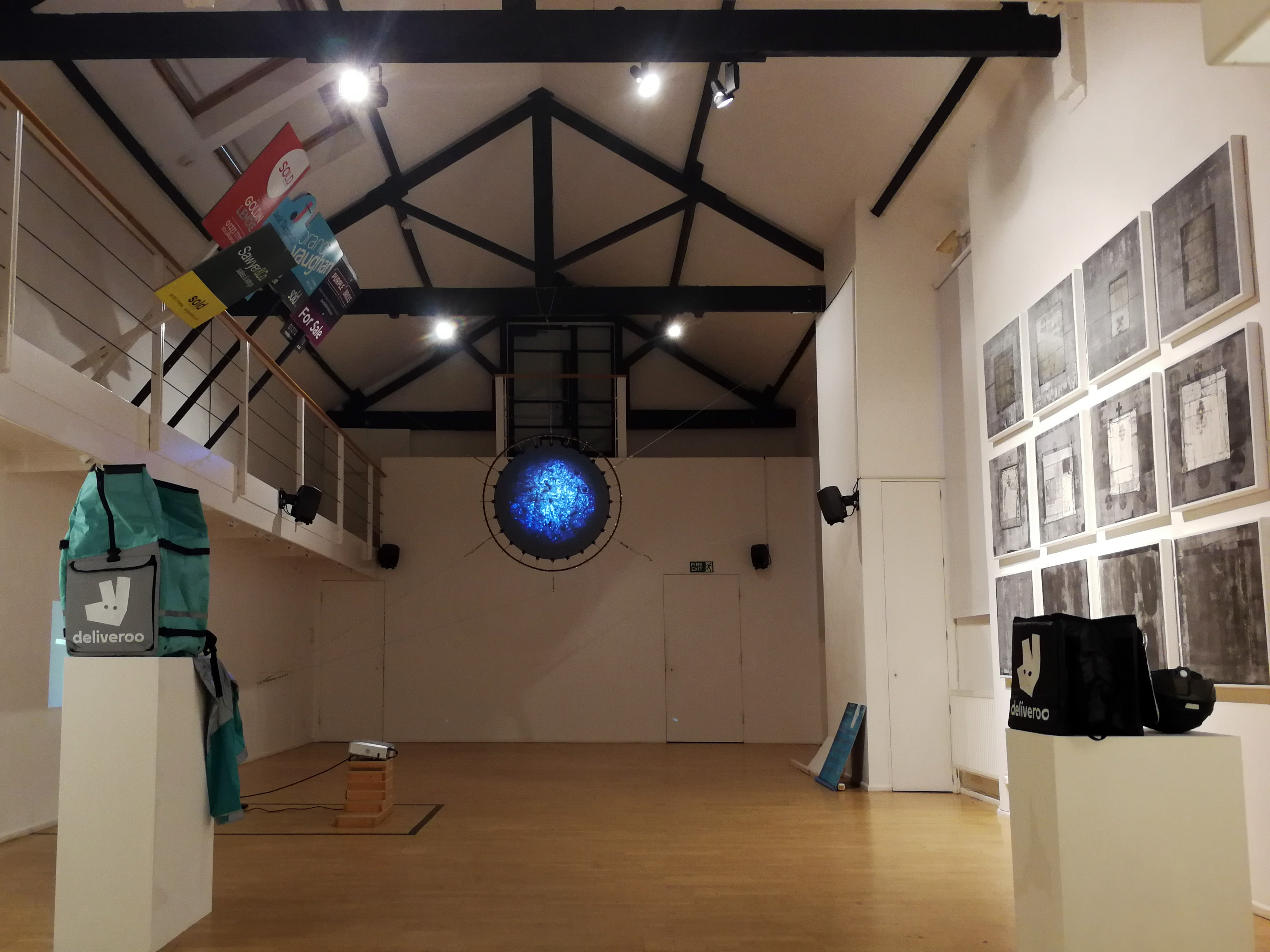 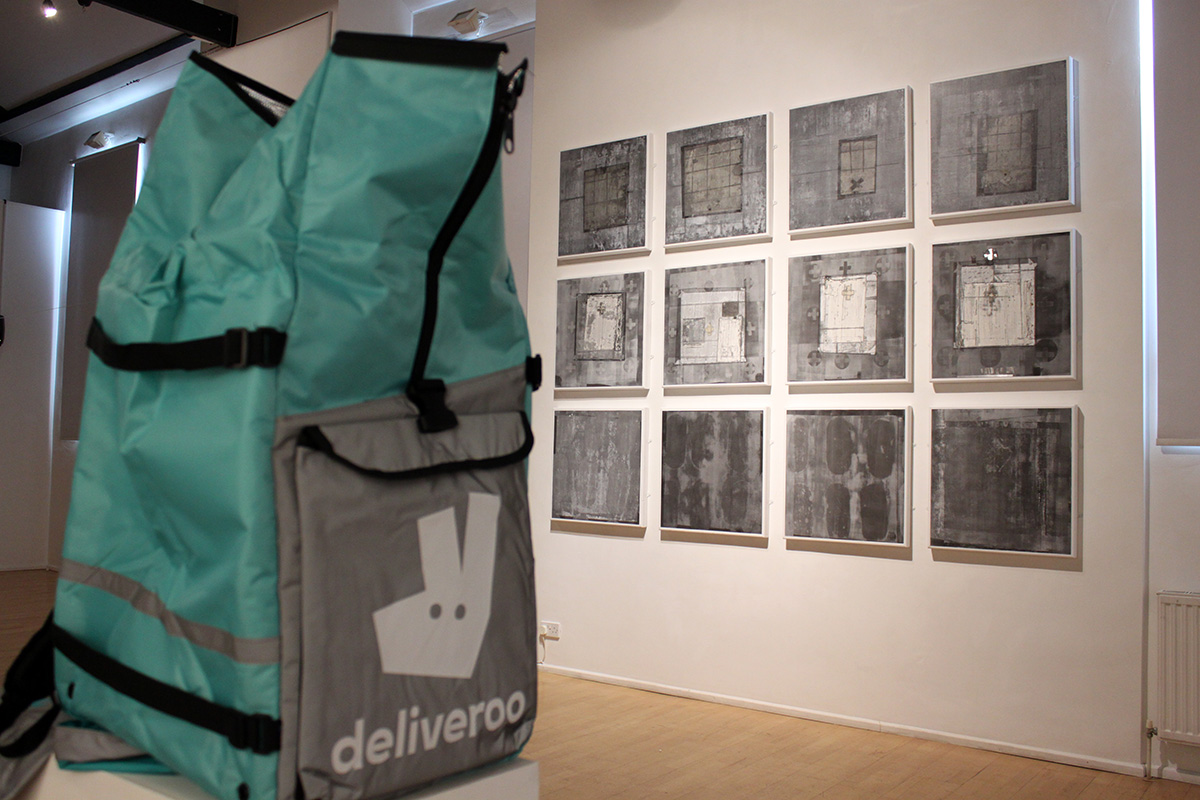 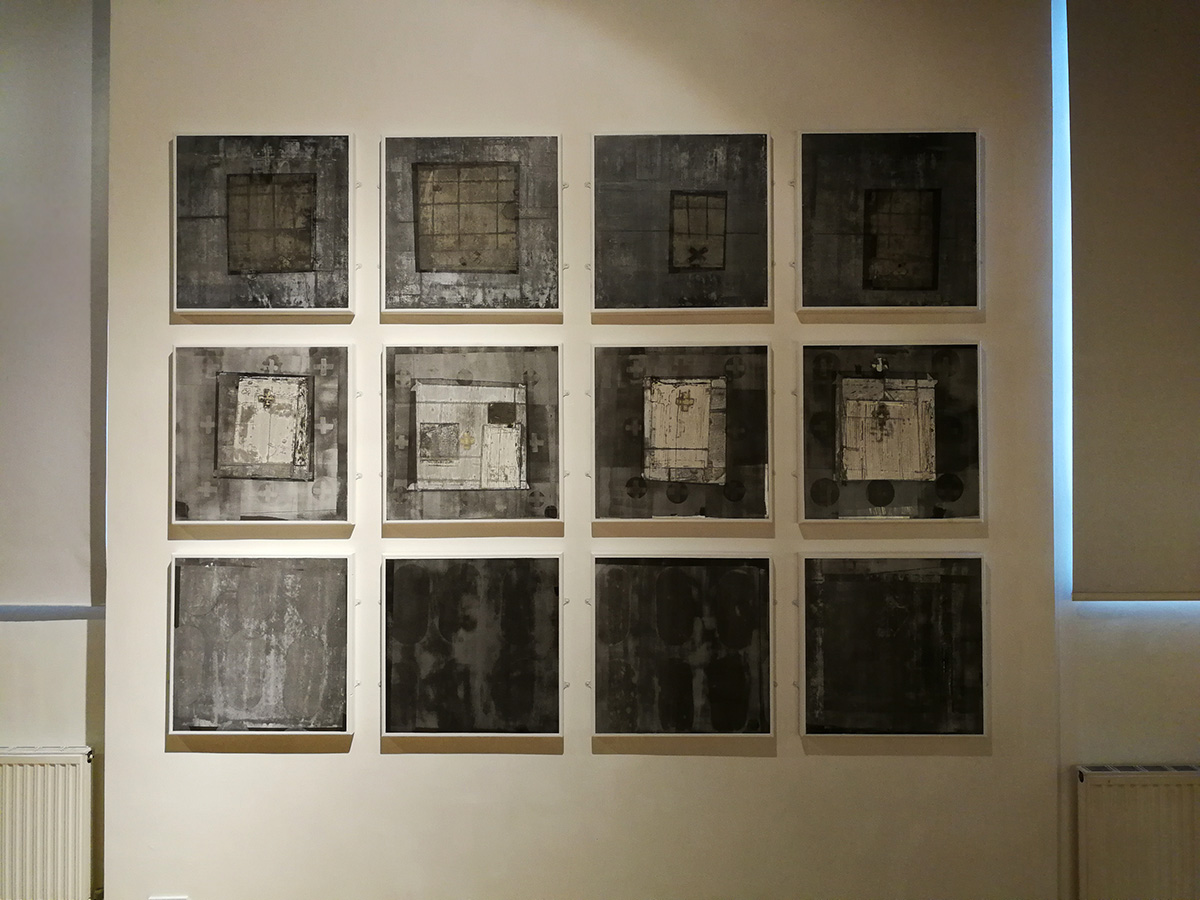 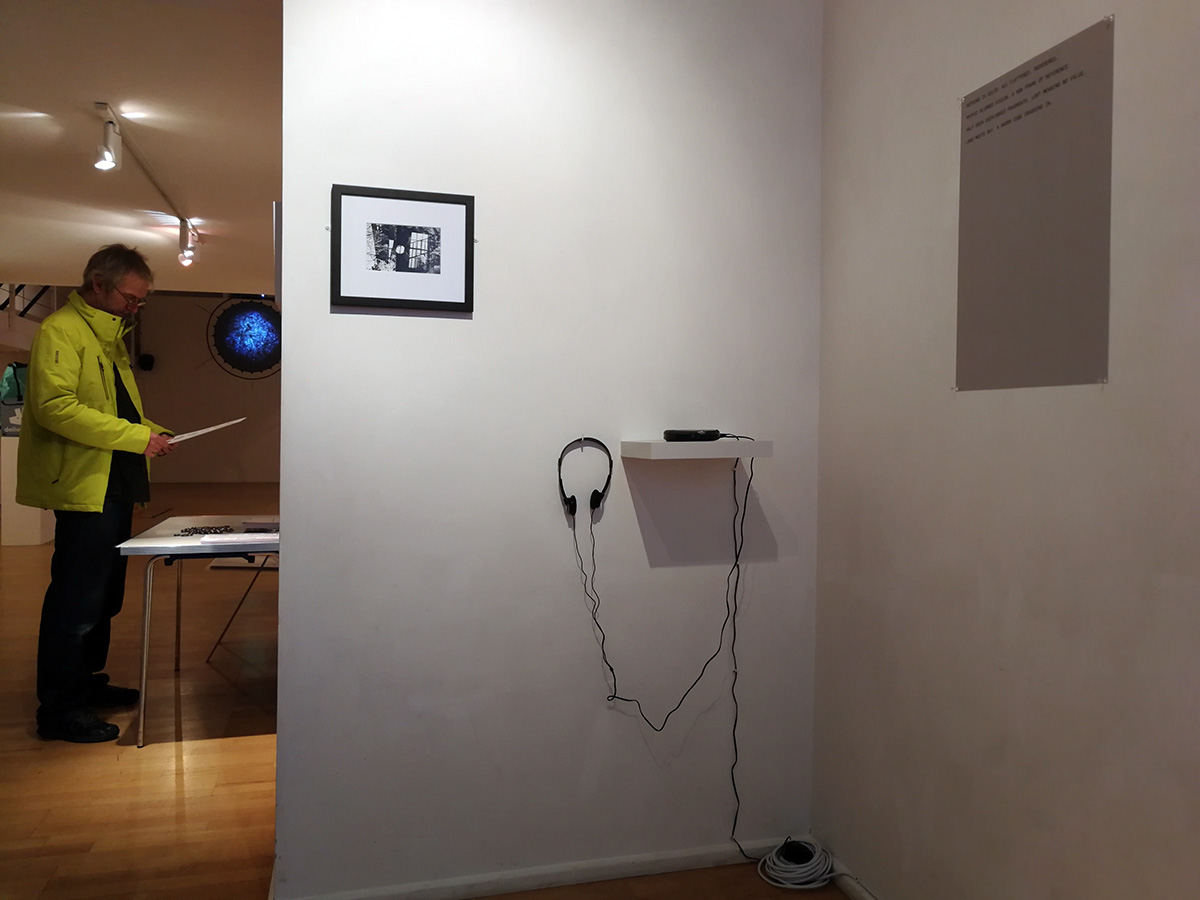