Thoughts and inspiration.
Thinking back to the time of making Bandiagara.

During the 1980’s I worked on many steel sculptures. Working with steel from British steel at Rotherham and Sheffield. I had an association with British Steel in the early 70’s as a student and they provided me with free new stock steel. I had not wanted to work with scrap metal, as was the tradition at St Martin’s at the time but with more anonymous new steel. These sculptures culminated in my show at the Leicester Gallery in Cork St in 1974 with large works (one over 7m long). The steel which I then used in the 80’s from British steel was the result of accidents in the production and so completely unique. I would have it delivered to my studio 20 tonnes at a time and would then cut out sections, weld and re-cut with a huge circular saw that could literally slice through a sculpture forming flat surfaces and ‘cropping’ the sculptures.

The earlier of the two works being shown at Castlefield is one of a series influenced by looking at and collecting old African art at the time. Henry Moore had collected from dealers in Paris, a father and son Pierre and Claude Verite. Henry Moore told Tony Caro of the place and in turn Tony told me, I used to visit Paris and ‘live’ in both the Rodin Museum and the gallery Verite. Pierre told me of visits from Matisse and Picasso.The shop was magical and the masks had a very strong and wonderful smell. Objects were stacked on top of each other and it was quite dark. Eyes had to adjust.

I would choose four or five pieces but had little money. Claude would let me pay in instalments. They were generous and very trusting. I loved Dogon sculpture, the carving and surface, which I am sure Giacometti would have admired. In later wood and bronze sculptures I tried to apply this kind of surface over the geometric forms.

The image of the Primordial couple and the Bandiagara cliffs were a big influence at the time as well as the Henry Moore King and Queen. 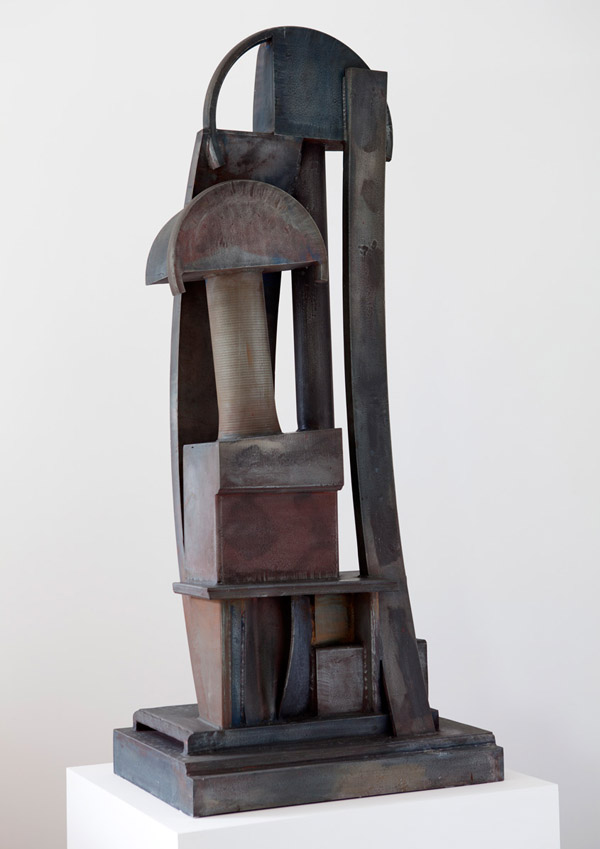