In our series of interviews with long-serving Group members, we hear from Victoria Bartlett – her early inspirations, the development of her practice, and a rather special London Group Open. 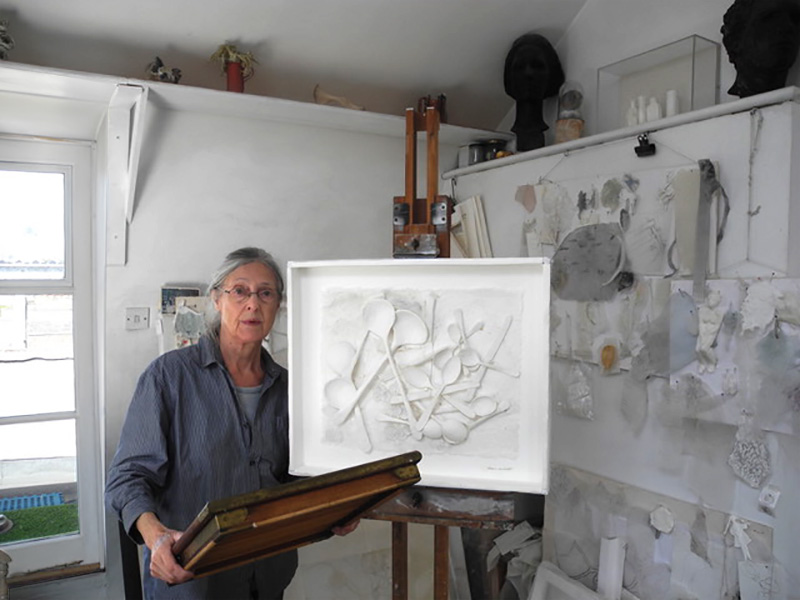 I was a war baby. After bombs and homelessness I moved on to a happy childhood in the country. Surrounded by nature and lots of old books at home, no new things, no media, no luxuries.

When I was eight years old, my creative mother took me to London and the British Museum to see the Parthenon sculptures. I fell in love with them forever. I made my own childish models from the clay I dug up from the farm pond and decided to be an artist and to go to Greece when I grew up. Ten years later, as an art student I achieved this, travelling on slow trains with wooden slatted seats, across Europe. It was wonderful.

I went to Camberwell School of Art. Our tutors were practicing artists; some now famous names. They taught us to look and to draw without compromise. I am still grateful to them all.

Later, to reassure my parents that I would have the means to support myself, I did a post graduate year, PGCT, at Reading University which proved interesting and useful.  My studies were in painting and sculpture but on graduation my allergies and health prevented me continuing to use conventional chemicals and dusty materials. I had to invent alternative ways of working.

I had been making paintings on canvas so I decided to cut them up. Some stitch and restructuring turned them into sculpture and another dimension. I taught myself to cut patterns to make forms. I was guided by observation and made three dimensional drawings that marked out the seams and shapes of the cloth needed. I explored the structure, texture and context of textiles. I also manipulated shapes and volume with dyed and painted colour as part of the substance of the material. I wasn’t looking to make any concrete certainties but rather to make images that were flexible, which invited our involvement and allowed us to imagine ourselves embodied in their forms.

Seduced by these new skills I flirted with making close to ‘trompe l’oeil’ appearances in my work attempting to conjure up sensations of taste, smells and memories. These works were considered unusual at the time and some of my ‘soft art’ works were the first to be shown at the RA Summer Exhibition 1979 and selected for The London Group Open Exhibition 1978 and for solo and group exhibitions in London, Europe the USA and other countries.

For many years I was a visiting lecturer and tutor at a number of art schools and colleges , Goldsmiths, Chelsea, Morley and Middlesex in London and Ruskin School of Drawing and Fine Art ,Oxford and others. I enjoyed it, encountering many creative discussions and interesting people both young and old.

My work and studio have always been based in my home, embedded in family life. This has at times been a challenge requiring much multi- tasking. I have worked in kitchen corners, transatlantic aircraft, cars, cafe tables, inside and outside. Now, I have my own peaceful studio to myself at the top of the house to make my quiet works. I can use every available moment and it has been particularly useful in the pandemic lockdown, as I have not needed to travel elsewhere to work.

Travel has always been important with Greece and it’s sculpture having a special place. Wandering around Europe I have been influenced by actually seeing so many wonderful original works of art from the incised sculpture and painted caves of prehistoric man through medieval marvels, particularly Gislebertus of Autun via the Renaissance, Ghiberti, Donatello, Piero della Francesca. Bellini, Titian, and home via Morandi, Chardin, Matisse, Cezanne, Giacommetti, Brancusi, and back to Holbein, Turner, Wright of Derby and Gwen John to name but a few…and of course architecture and museums too.

During the 1970’s I was influenced by my friend Birgit Skiold’s beautiful white deeply embossed prints based on Japanese Gardens and images of water. I became a trustee of her estate after she died and was involved in the selection of the International Artists’ Book awards in her name. I was seeking a different subtle delicate dimension to my work and began to be fascinated by paper and make experiments.

I now make wall sculpture from mixed media and paper. 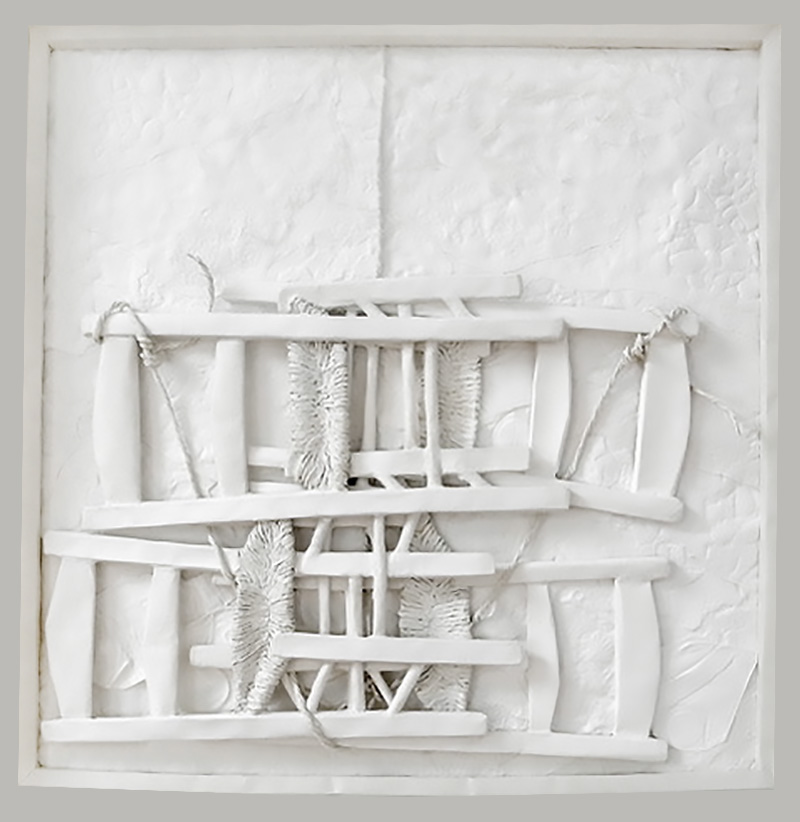 I realised that I would need to make certain papers for myself. I use a mixture of pulps. Some is recycled and I mould it into forms, modelling shapes, casting the paper. Sometimes I use a little colour to emphasise a particular element. My first choice is white, the brightest colour of all. It allows us to colour our own imagination. White shapes respond to the variations of light and shadow and constant changes.

For a long time, I have been inspired by relief sculpture, an art which for centuries has expressed wordless ideas and myths. It embraces the space between three dimensional actuality and two dimensional illusion.

I’m interested in exploring the environment we create for ourselves. The objects we choose and use that reflect our thoughts and lives. Most of my work is absorbed from life or I make drawings and sometimes use photographs. Other images are memorised or imaginary. I also use embossing and printmaking techniques. Underlying my work is an abstract vocabulary though the figurative image is foremost. The making process is an integral part of my work. It can take a long time. It materialises my thoughts and ideas.

It meant a great deal to me to be selected for the Open exhibitions three times by some of the leading artists of the day who were members of The London Group. To be selected for at least two previous Open Shows I think was required then to qualify for election. I was delighted to be proposed by David Whitaker and become a member in 1984. Sadly three of the artists elected at the same time, Joe McGill, Janet Nathan and Kit Twyford, have died but they have left me a legacy of good memories. Other members from the 1984 selection were Gus Cummins, Janet Patterson and Suzan Swale.

I have exhibited with The London Group for over 40 years and have had many memorable and enjoyable exhibiting opportunities, and have made good friends too.

In the 1980s and 1990s, The London Group went through some turbulent and intriguing times, all recounted in David Redfern’s splendid book , ’The London Group, a history from 1913 – 2013’.  The Group’s exhibiting became more ambitious and a highlight for me was the 1993 Open Exhibition held in the Barbican Concourse Gallery and sponsored by Unilever. 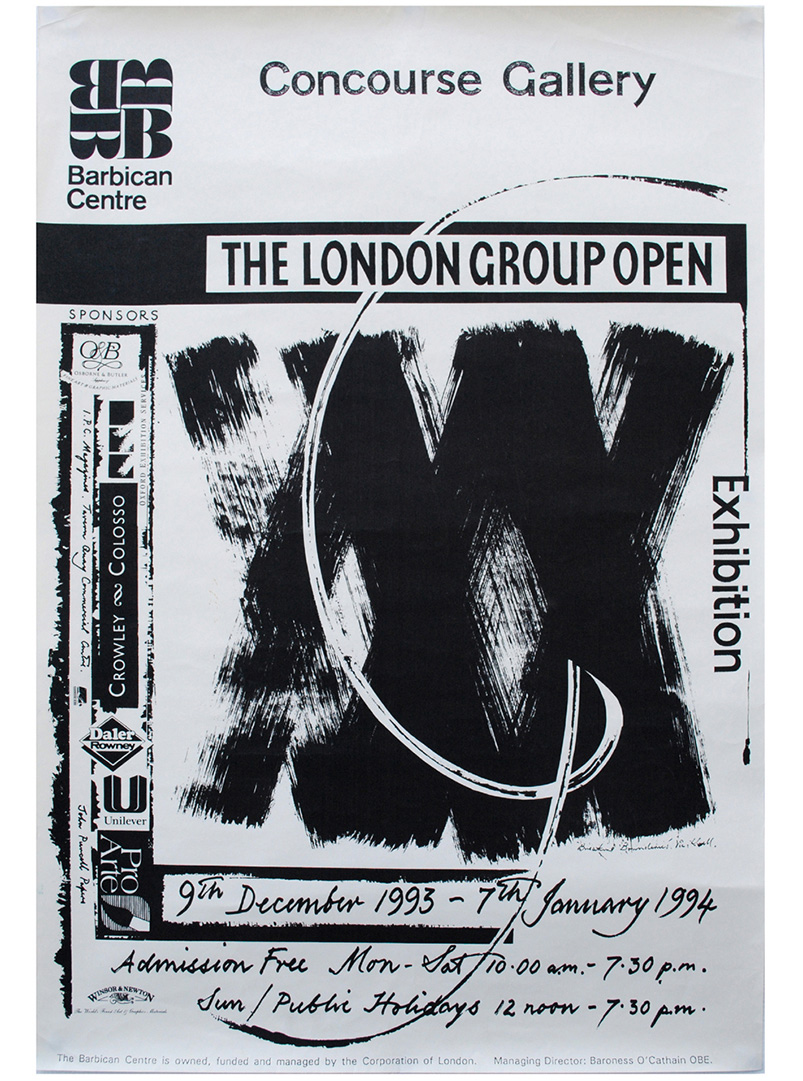 I found myself fully involved, especially over organising the selection process, which was from actual works and took place on an industrial estate in Rotherhithe. Any member was encouraged to join in the selection and exhibitors were selected by a simple majority of hands. Next door to our unit was a film set construction team making life size dinosaurs which peered over their doors adding to the atmosphere of organised chaos. The Barbican is a complex space and on one occasion the President, Stan Smith arrived very late for a vital Concourse Gallery meeting having got lost, going up and down the complex Barbican lift system for a long time. Eventually he asked a fellow lift passenger where he should go remarking that how could anyone have designed such a building. After a pause the man replied that he had designed it but didn’t know where he was either!

Hanging the Concourse Gallery was a challenge but in the end it looked good and attracted high profile attention.

In 1993, my husband Adrian became LG president, so my involvement continued non-stop.

The London Group has always been inventive when hanging exhibitions. For an exhibition at the Walk Gallery in 2001 a large painting by Bert Irvin had to be lifted over the roof of the gallery. A dramatic sight which stopped the traffic.

Victoria Bartlett LG was in conversation with Claire Parrish, 2021 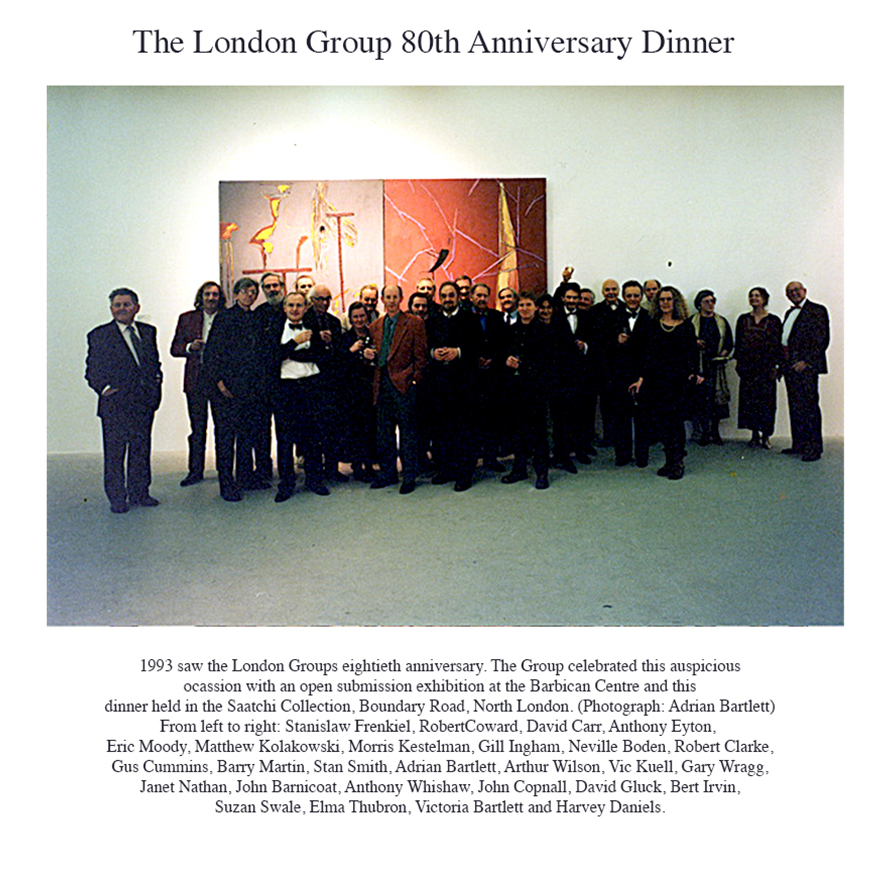