Several LG members run their own Galleries and groups. Tisna Westerhoff co-founded hARTslane and this article is about one of its recent projects.

A spaghetti recipe, portraits of Hatcham locals, numerous pets and in one case, a blue Darth Vader: these are just a handful of images you can now find depicted in a tile mural created by the local residents of New Cross Gate.

Lewisham Council and the Hatcham community publicly unveiled the wall of 100 blue and white tiles, named “The 100 Wishes Project”, on 12 October. Each tile was designed and painted by a New Cross Gate resident.

Local non-profit gallery hARTslane created the collage of tiles to capture residents’ hopes and dreams for Hatcham and celebrate “unity, diversity and hope”. Community members of all ages participated in the project ー the youngest artist is just three-years-old.

Tisna Westerhof, the Dutch director of hARTslane who spearheaded the project, hopes that the tile wall will put New Cross Gate on the map for the right reasons.

“New Cross is often in the news for unpleasant reasons such as knife crime, but there is a really wonderful community here so we thought the tile wall was a good way of celebrating that,” she said.

She said that the wall took six months to complete and secured funding from the Mayor of London’s Culture Seeds programme, which provides grants for community-led cultural projects.

Westerhof, who is also an artist, added that the blue and white theme of the tiles is a Dutch “Delft” technique borrowed from her heritage and traditionally used to express symbolic wishes for the future. “Each resident expressed in their tile something they wish for their community, which is especially important in these changing times — I really hope they feel proud of it.”

Local resident and celebrity chef Vivek Singh, 47, said that his tile describes New Cross Gate as the epitome of the London melting pot.

“I wanted to be a part of this project as I lived on this street for fifteen years — I have made valuable friendships and my children grew up here,” he said. “This project is a great way to engage people from the area, especially after all the fragmentation which has occurred in the UK over the last two years and the hardship that hARTslane has previously faced.”

hARTslane is entering its eight year of holding socially and politically engaged exhibitions in a disused garage after getting off to a bumpy start. “In 2012, we tried to rent or buy the space but Lewisham Council would not let us so we occupied the space for a year,” director Christiana Bottigella said. “In 2013, the council realised that we were using the space for the benefit of the community, so then allowed us to stay.”

The gallery has just applied to the council for a twenty-five year lease. 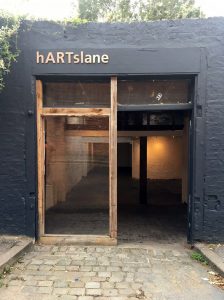 hARTslane is located in a former motorbike garage in New Cross Gate. It is an experimental art project space in South East London rooted in the local community with an international reach. This is a place where artists and local people come together to share ideas, explore contemporary issues and be inspired. hARTslane programmes ideas-driven group exhibitions and projects with practitioners at all levels and stages of their careers. Through both on-site and offsite work they give artists the freedom to experiment, create and exhibit new work in a non-profit setting.