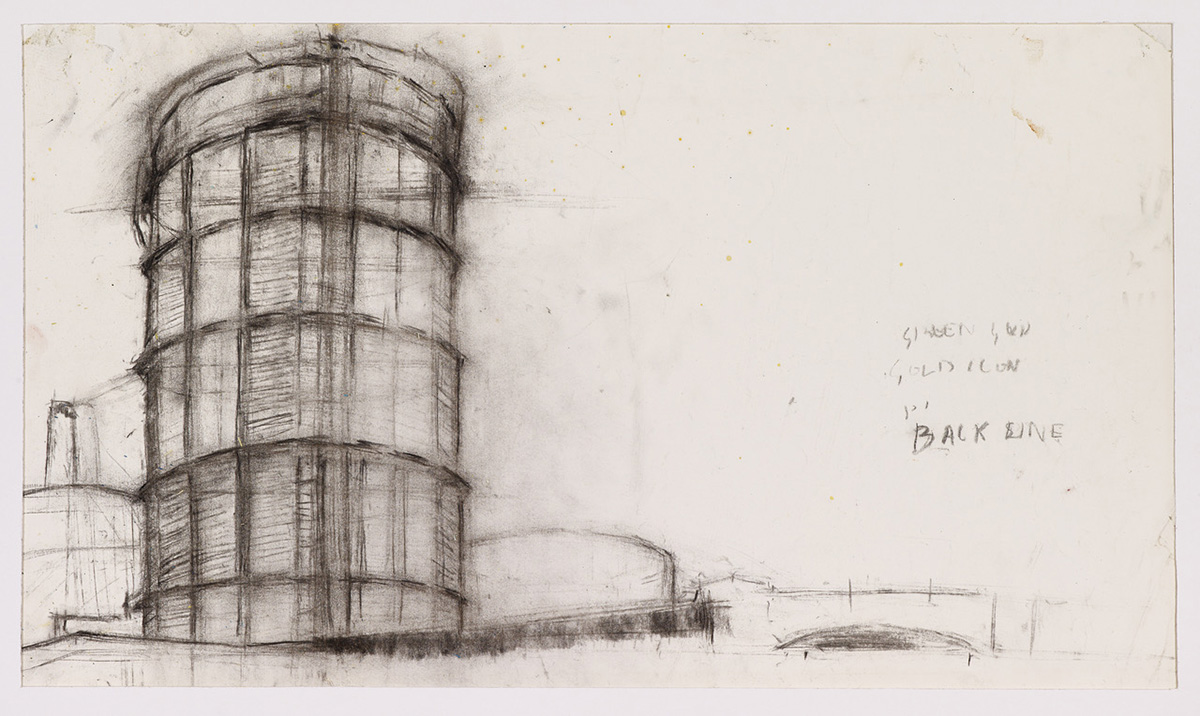 I have always made work about the landscape, mainly the urban environment. I was initially drawn to the gasometers and tower blocks that populated the area I grew up in around South-West London.

I was first inspired to work from Gasometers while attending a Foundation Course at Chelsea School of Art in the late 80’s. Based at Bagleys Lane near Wandsworth Bridge and stuck for a subject matter I started painting and drawing from these monoliths that stood opposite the school. I was taught by the painter Sargy Mann and, at the time, had been working in the Life Room and painting directly from observation. On reflection, I had an empathy with this method of making work but I was searching for different subject matter that spoke of the world that I inhabited. I had also started painting en plein air in North Wales, where my parents had a cottage, focusing on the mountains and slate mines of the local area. I began drawing and painting from the Gasometers in the streets that they overlooked. On one occasion, I was approached by a local who told me that they had been built by prisoners of war during the Second World War. 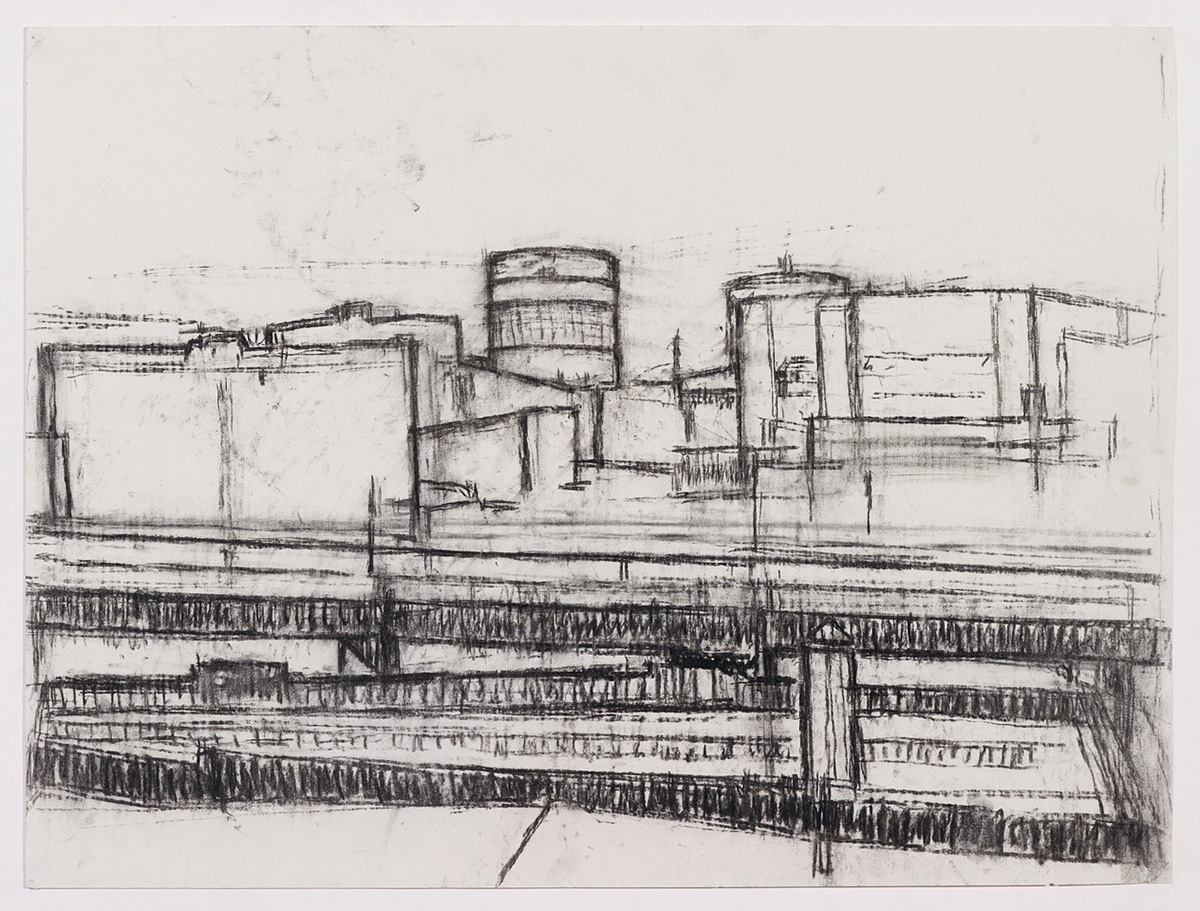 After completing my Foundation course, I received a place at the Slade School of Fine Art to study painting. I would commute from Wandsworth to the centre of town on a moped, passing the Gasometers (or Gasholder to give it by its proper name, as once corrected in a letter from British Gas) near Chelsea Bridge and next to Battersea Power station. They became of particular interest, as I would pass them in the morning and on my way home. Like the mountains of North Wales, they change in scale depending on the light and my distance from them. I had, at the time, tried painting these mountains from memory, but realised I needed to be able to return to the motif as I did not have enough information. The Gasometer had the same formal elements I was interested in when painting mountains, an ever-changing sense of scale due to light and colour. In hindsight, they were like urban mountains. Working from these in London gave me the opportunity to easily return to the motif, drawing and painting them directly from observation, then using the images in the studio environment to explore my internal and external responses to these structures. 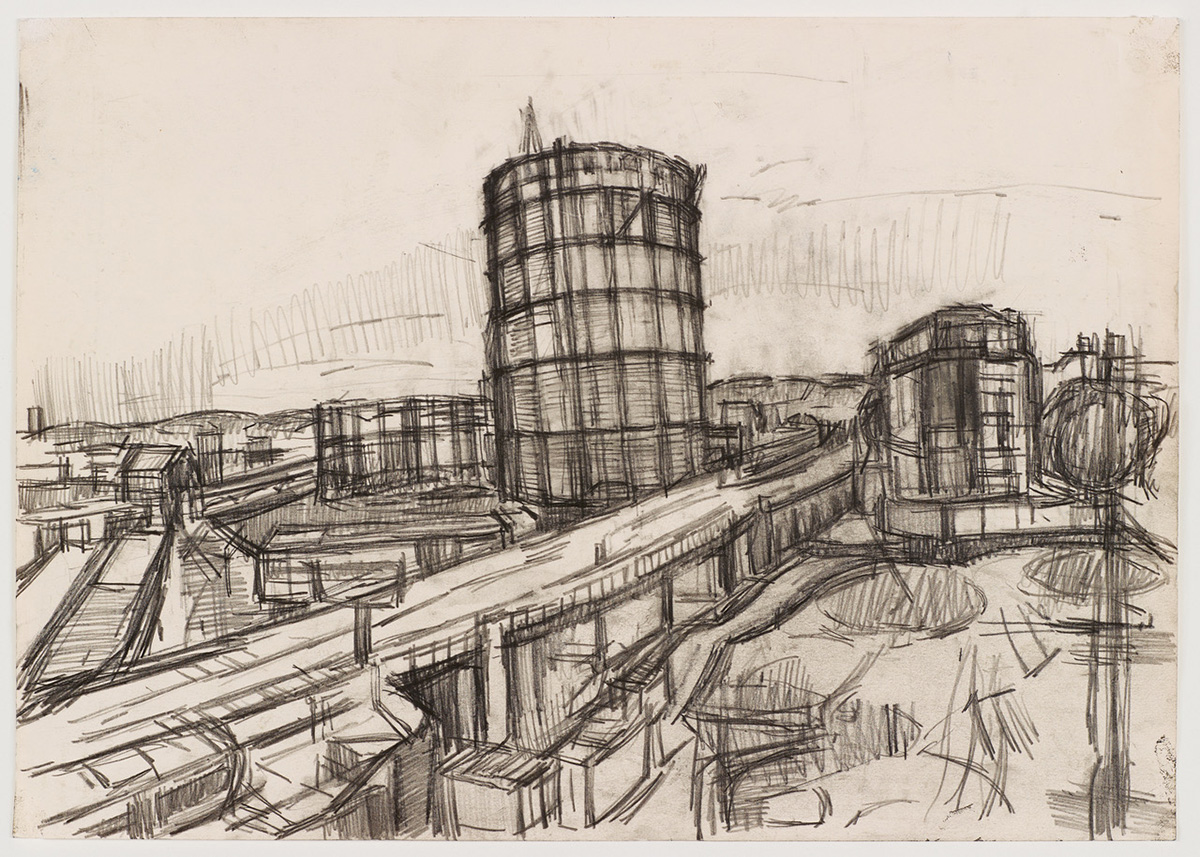 In 1979, after finishing college and working as a studio assistant to Bruce McLean, I received a scholarship to travel across America to record what I considered the ultimate urban landscape. I took a studio in Williamsburg, Brooklyn which I think this was influenced by the fact that it had a great view of two Gasometers in Queens. Painting and drawing them from the roof of the studio, it was as if I was locating myself in New York and reflecting on my English approach to paint, exploring a subject matter that was familiar to me.

On my return to the UK, the first thing I did was to revisit the Gasometer in Chelsea, drawing it from the platform at Wandsworth Town train station.

I have returned to these subjects for over 20 years, making drawings, paintings and dry-points. Influenced by the German photographers Bernd and Hiller Becher, I have documented and characterised the different types of Gasometers that exist in London. Returning to these subjects is like re-reading the same novel at different periods of your life. Your changing life experiences transform the way you read and experience the subject. Each time you return to the motif you find something new to take from it.

Converted or Demolished, gasometers are disappearing from the skyline, as gas is now usually piped directly from the North Sea to underground storage facilities. The Gasometer in Chelsea was removed a couple years ago but I was lucky enough to be able to draw it from a flat overlooking it as it was slowly dismantled.

My obsession continues. I appear to be known as the artist who paints gasometers and people say when they see a Gasometer they think of me. A friend of mine sent me a novel simply because of a paragraph describing a property developer visiting a Gasometer he has just bought. The words perfectly describe the visual experience and thoughts I had when I drew and painted the Gasometer in Chelsea.

“It was painted a steely-grey blue, and rose up against the sky like a part of the sky itself; iron air, a cloud, a mirage, a paradox, defining a space of sky, changing subtly in colour as the colour of the sky changed. It stood dark and cold, it would catch the pink wash of sunset, it would turn white like a seagull, it would take upon itself the delicate palest blue against a slate-dark background. It was a work of art.”  Margaret Drabble, The Ice Age (1977) 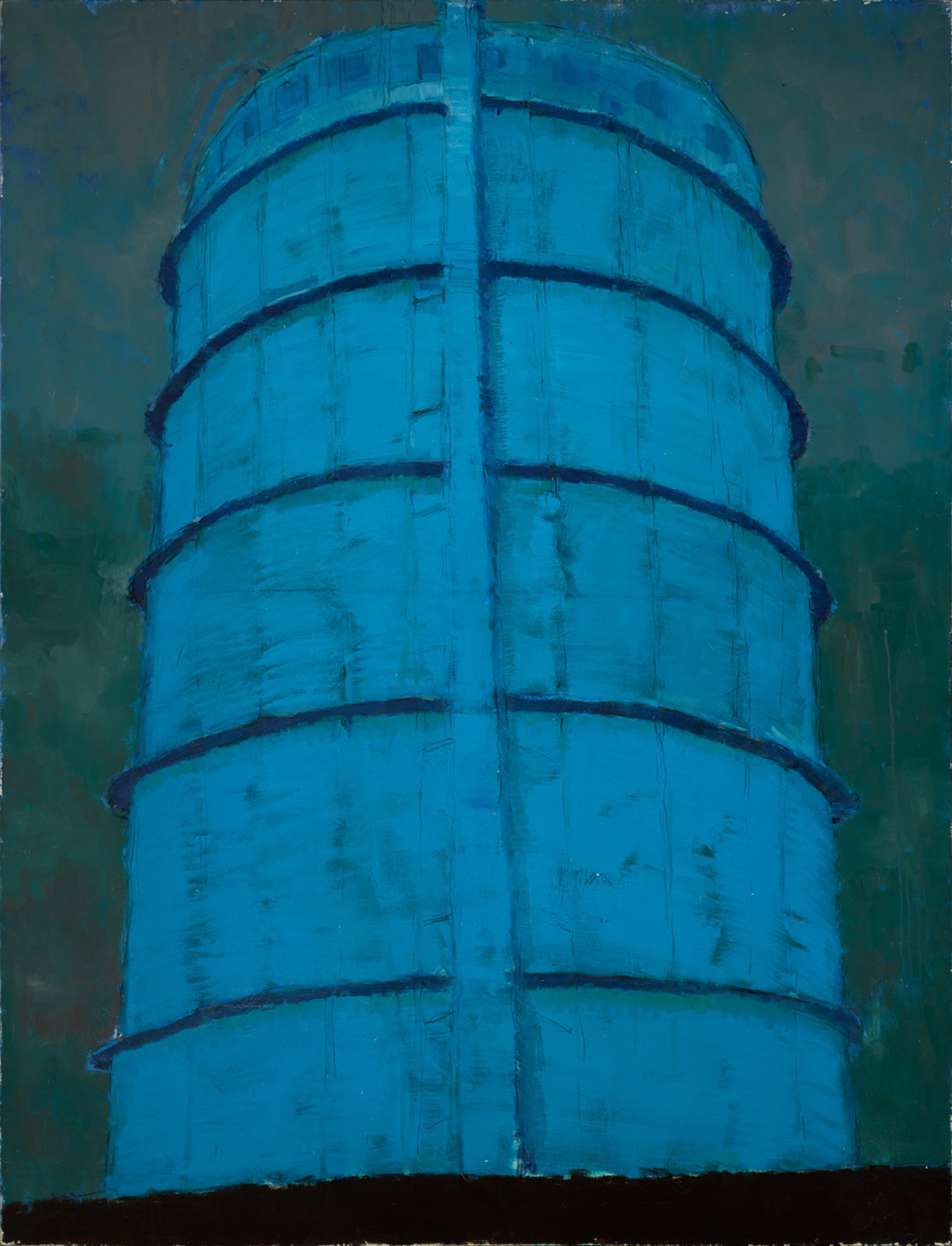