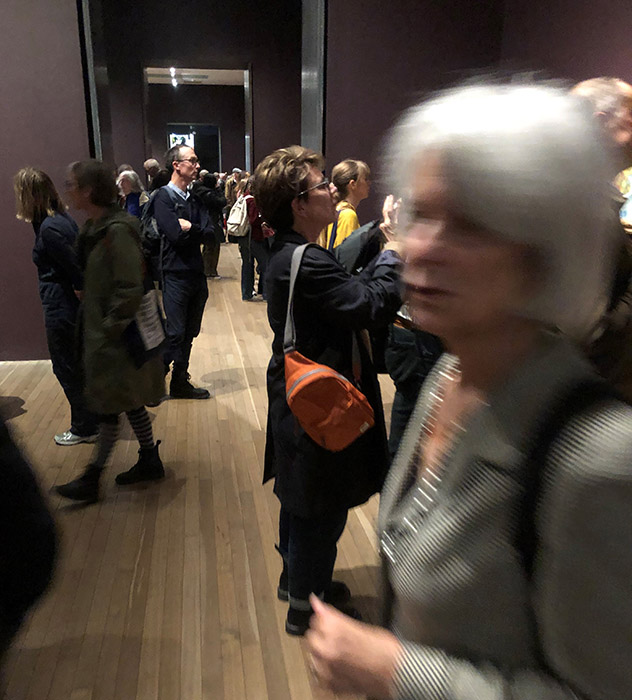 The ticketed Cezanne exhibition at Tate Modern was heaving with visitors and is the largest exhibition of his work since the ’90s. Which surprised me for an artist that died over a century ago. In a quote from the catalogue Kerry Marshall, says, “No one looks to Nature or the Self anymore, as the source of revelation in Art…” yet that was exactly what Cezanne did throughout his life. Initially influenced by Delacroix, Daumier and Courbet, and later Pissarro as his mentor, he countered fragmentation with attention to the organisation of the work, reconciling the contradictory demands of abstraction and representation.

I remember as a young artist who had attended Camberwell School of Art where Cezanne was treated like a saint, seeing the exhibition “Cezanne’s Early Years (1859-1872)”, thinking this person cannot draw very well, it all looked so amateurish.

Cezanne was the son of a wealthy banker and was also lucky enough in his formative childhood to be best friends with the pre-eminent French author Emil Zola. There was a paternal objection to him being an artist and their family relationship never appeared comfortable, Cezanne even hid the knowledge of a son and his association with a woman from his father. They say it takes a lifetime to develop a tiny talent to its utmost and with Cezanne, whose passion was immense, there was greatness in his talent. Moral weight in his exuberance’s violent and persistent restraint through meticulous labour. Infinitesimal variation with chords of colour, his effort for accuracy and the inevitable degree of human error.

A continuous source of interest and pleasure with the works giving breath and life. The exhibition is very large, with many works to see, giving a picture of his overall output.

It is said you could buy a Cezanne painting in Pere Tanguy’s shop in 1870’s Paris, a French paint dealer at the time, for as little as 40 Francs. Cezanne has proved to be a great painter for the twentieth and twenty-first-century art market, with current prices at fifty million. But the bubble of art market prices does not detract from this description of him, written in a letter to Zola from a mutual friend, “that poetic, fantastic, bacchic, erotic, antique, physical, geometrical friend of ours.” They talk about Cezanne breaking the rules, like an anarchist, but he made his own rules and followed them in a slow, methodical and orderly manner. He wasn’t a rule-breaker. We think of him as a disciplined cerebral artist rather than the agitated, sensual, violent man he was underneath. Reconciling opposites, the conflict between classic and romantic, searching for an organic structure with the poetry of perception. Grand and quirky in the conversation between objective perception and subjective encounter as a journey into the unknown.

Cezanne studied his subject with ontological perception and his later works are like a tapestry with non-blended brush marks, not the smooth transitions you get with skilful craft painting. Earlier work is thick, oily and structural with gesture and movement, which I find attractive due to my practice. Form distortion comes from pressure within, it’s personal, not with overarching linear perspective the perspective used is a mix of additive and subtractive, reasserting the primacy of the painting as an object. Struggling to do what he couldn’t do rather than do what came easy. Dissatisfied with impressionism he was ready to pit himself against the old masters with late monumental works such as Grandes Baigneuses.

Using subject matter closely he was not afraid to experiment creating a radical new way for observation, translated into representation as a new language of reality. Cezanne wanted to be a classicist and could not, his integrity would not let him.

His “greatness” lies in the amount of future creativity for other artists that he stimulated, such as Cubism, Fauvism and Expressionism. He was an exemplar who influenced successive generations of artists from both modern and contemporary eras in their search for an autonomous painting style. It was not the art market that made him great, but his life’s self-directed, single-minded movement. In his letter on 23rd October 1905 to Emile Bernard, he stated, “I owe you the truth in painting and I will tell it to you.” And that is what you sense from Cezanne, from the whole exhibition, the truth.