Not all London Group members live in London. We have members across the UK and even a few abroad. In Beginnings and Endings, Victoria Arney discusses her move to France, the liberty of artistic reinvention and wine making in the Languedoc. 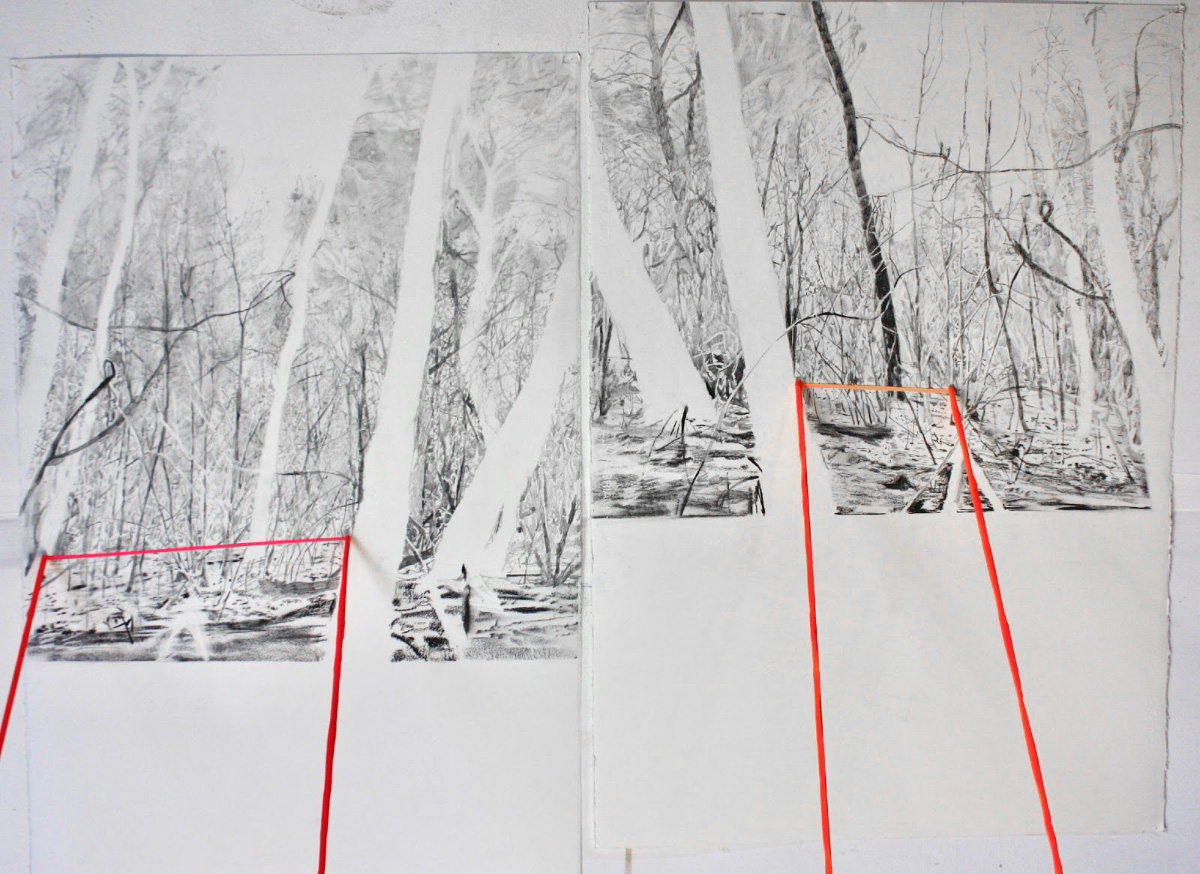 In August 2014 we got into our Van at 2am with our two cats and two boys ( 11 and 8 ) and what we could cram in and drove through France to our new ( temporary ) home near the small town of Sommières in the Gard ( Languedoc Roussillion ).

We decided as a family to move to France and to have one last adventure together before the kids left home and went their separate ways. We were running our traiteur in London and once we  announced it was for sale we were all swept along as if by a wave as one thing after another got  sold. We had various plans and projects and France seemed to be a place where we could realise  some of them. A fellow artist from my days at The Slade had made the move 20 years before and  they were a huge inspiration.

One of our plans was to make Natural/biodynamic wine and that was why we ended up in the Gard as there were plenty of cheap old vineyards for rent and a growing Natural wine resurgence.  At the time of moving to France in August 2014, I had finished my M.A in Print at UAL Camberwell 2 years earlier. Taking the M.A had revitalised my work in unexpected ways. I was on a roll and the decision to move was complex and although exciting not an easy one to make.

I was showing with Bearspace Gallery in Deptford. I had some shows lined up and so in the  absolute chaos of putting my children into French school, dealing with a new language and trying to find somewhere to live at least I could work. We had rented a tiny bungalow in a village near the school ( the only one that would take two non-French speaking boys ) and I rented a sort of studio space in a vigneron’s house near Montpellier through someone we met.

I would go there daily. I had moved a small amount of studio materials with us to work but missed my fellow artists and Thames Barrier print studio enormously. It was a kind of survival studio – I wanted to keep the momentum going that I had just achieved in London so that I felt still attached to it all. Everything outside of the studio felt very unstable. 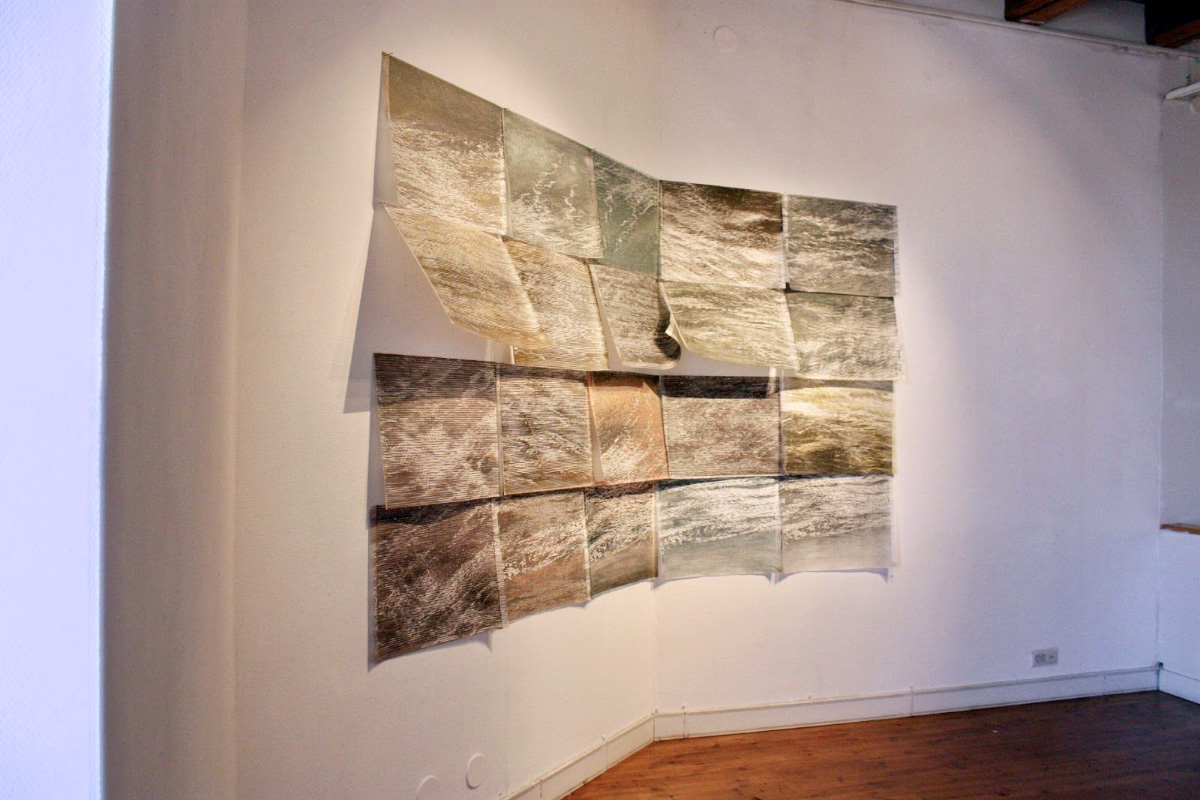 Luckily I had to make work for a group show in Finland for the following spring of 2015 – up until that point I had been working only with with etching and print – I had no press here in France and  no print studio. So I began to make woodcuts that I could print with a barren by hand on the  kitchen table.

The piece I made ‘ No Mans Land ‘ was 4 m x 2.5 m made up of separate sheets of Kozo paper  double printed and pinned together.  The whole thing could be rolled up into a tube and fitted into my suitcase. It was and still is an important piece. It changed the way I was making print and how to show it. It also allowed me to move away from the technical intricacies of etching which wasn’t the path I necessarily wanted to follow.

It felt endless and open and I suppose, looking back, this was a state of mind as much as anything, a sudden liberty that no one was watching and I could reinvent myself. In the end, the work took on another aspect when shown as the Kozo paper was so thin it moved as people passed it – I was so excited to have made a paper installation.

Up until that point I had been making work which looked at the decay, shift and fragility of our relationship with nature and the loss. I made several works around the subject of the Japanese tsunami’s of 2011 and gyres which were all informed by internet images. I was interested in using the idea of printing double images that blurred these lines – altering them into fragile realities. 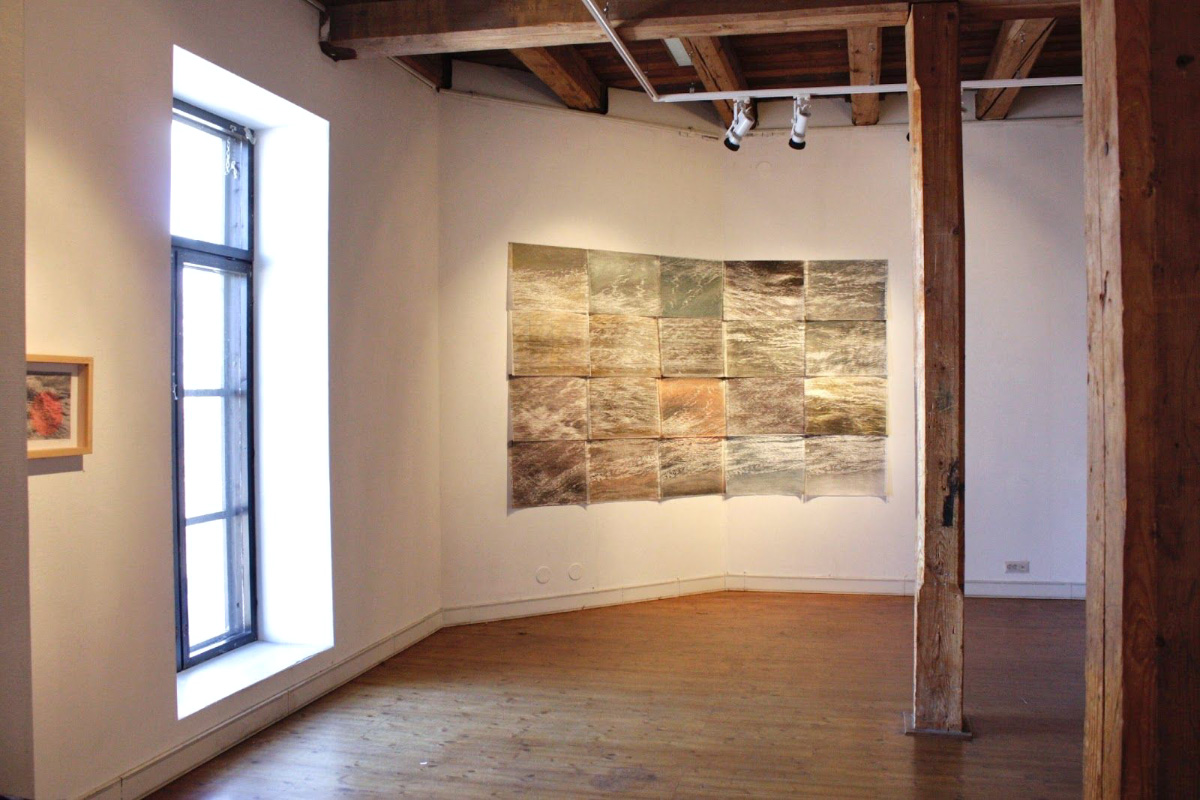 These are still very much part of my work but with this move away from an urban environment I  began to relax and look around. The destruction I had focused on was almost cerebral –  inaccessible places distant lands brought closer by social media, research, internet etc..

perhaps for me it was It is easy to be focused on a distant image if you are not in a landscape  already ….

This bombardment of images of environmental destruction is the noise of our contemporary  landscape,…..how do these two realities of landscape rub alongside each other? This dichotomy  is for me to do with touch and noise… and so I try and think about areas of my work having more sound/noise than other areas and incorporate that idea into their making.  There is a slowness too that has crept into my working day.

I often begin the day walking, I have become aware that something different happens if you walk  the same path often enough – your not directionally walking to a fixed point, not conquering, you  are just there at a particular moment. Often I take the same path and usually, not always I notice  something else on that path. I collect, photograph and write and this forms a starting point.

I have begun to put these word into the prints as Braille holes. I have been doing this for a few years on and off – a visual code that is recognisable as a code but unreadable, interrupting the imagery and allowing me to build up layers. Holes and circles are very important in my work, floating behind and in front of the imagery creating other spaces and interrupting and creating a space.

Touch and sound are something that I think about a lot. Most of what I collect at the moment is plastic – tonnes of the stuff. We are divorced from what  actually happens to this stuff. Much of the fruit growing here is done under plastic, vines are  planted in plastic – it is everywhere becoming part of the earth, so on the one hand I have rubbish and the other nightingales, woodpeckers, wild orchids and huge butterflies.

I had no idea that I was about to live in such a landscape of extremes. In summer it is 40 degrees and flooded in the spring and autumn. There are mosquitoes that can kill your dog. The schools have beds in them in case it floods and the kids have to stay! Rivers that appear in spring for a few months and disappear leaving pools of dying fish in the summer – a different pace to everything that grows here – a sudden flowering and dying, an urgency.

So place has changed my work. I have a forest close by where I can try things out and last year I made my first public sculpture with another artist in the Cévennes. We worked outside with bamboo and painted a hot colour spectrum circle in the bamboo forest. 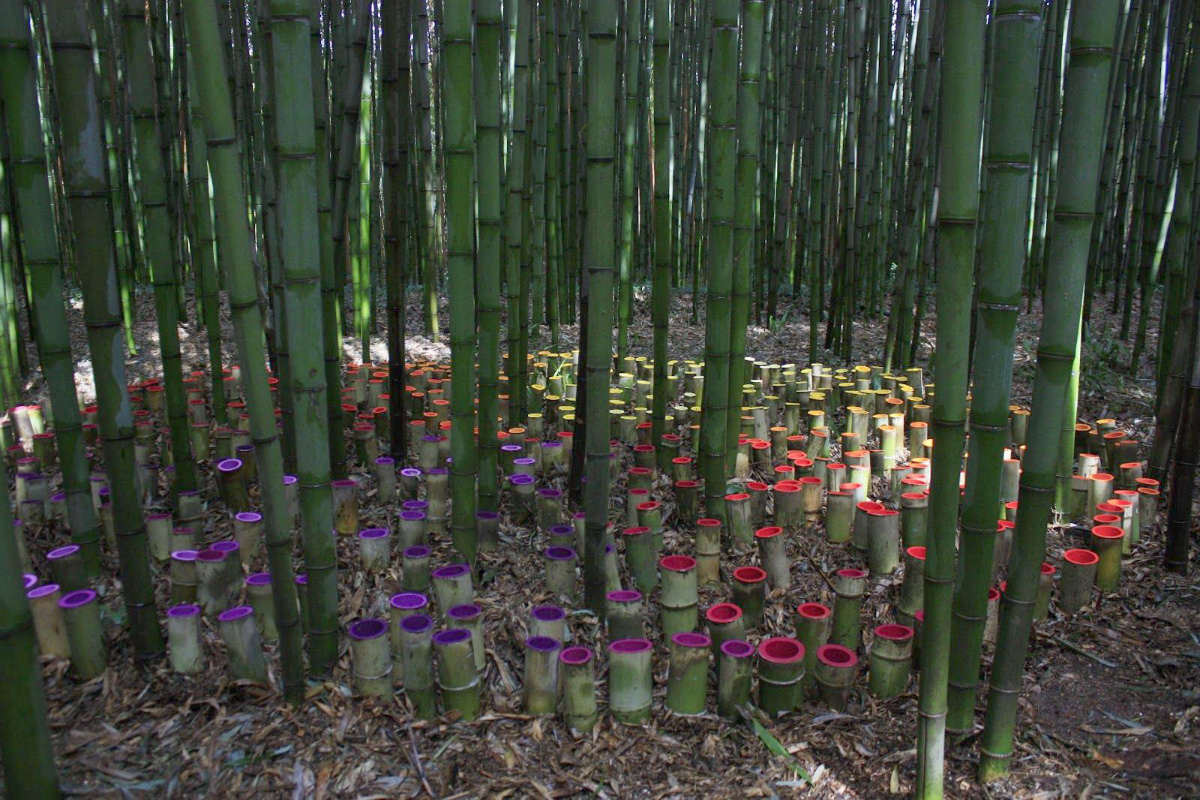 As an artist who now lives in a rural landscape ( it is not unknown for there to be horse tethered up at the boulangerie!) I still hear the background noise to contemporary landscape. These images know no borders and I realise more than ever that in the end we are all just travelling through.

I came across this postcard of Van Gogh whilst writing this and  wanted to share it – it was taken not far from here in the landscape around Arles in 1888. 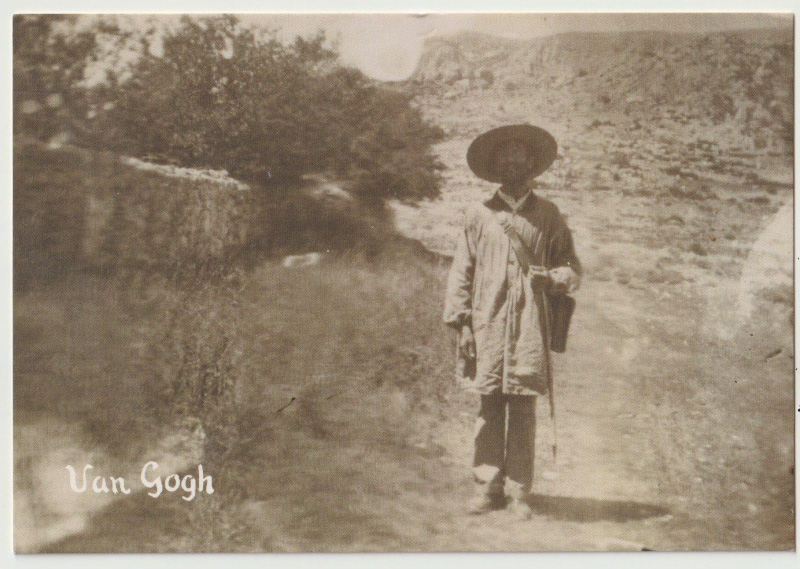 We offer a studio space and a gite for €500 ( in winter ) if Artists are interested in escaping and  making new work. ( no materials provided ) – use of the press can be negotiated.
For more information visit ​pressinthevines.com