“There is conflict for sure and creative differences shout to each other across the space.”

Sandra Crisp LG: “Poor materials’ such as string, adhesive tape and everyday detritus discovered on the studio floor; Collage, drawing and painting are widely incorporated into your studio practice. Drawing is ‘absolutely integral’ and mark-making, cutting, ripping, punching holes, slicing, embossing are all used to maximum effect in, for example, your ‘CONSTRUCT DECONSTRUCT RECONSTRUCT’ series on paper and MDF. The alchemy of dust, chalk, ink, lead, chocolate, gloss and acrylic paint is pushed to the limit. In your video and photography series ‘Bad Choreography’, you become the medium itself –  interacting with / leaning precariously onto props such as ladders and stools. In ‘aUDIOMAPS’, sound is filtered, cut up, reconfigured, sequenced and looped.

I would really like to hear more about any combination of the many different media and processes used in your perpetually experimental practice.

“His workplace is either a very tidy studio or a dirty laboratory. There is good reason for such order. Stephen requires a lot of things to hand. Everything has possibilities and potential. His palette is the myriad of acquired ephemera in which there is no hierarchy. Elegant frames sit alongside plastic cable, the King and the Pawn kept in the same box”. Sean Williams. Exhibition essay for GEOMETRY & GESTURE.

Problem creating, problem addressing process.
Close examinations avoiding closure.
Physical engagement with materials is a form of cognition, of learning.
There is this fairly constant internal debate I have…
About process / experimentation / materials vs what actually is this ‘stuff’ I’m working on…
Why am I doing it? What am I hoping to communicate? Who and what is it actually for?

Very recently I had a short Twitter exchange between Micheál O’Connell / Mocksim and myself. It was with reference to ‘conservative photography’ in the first instance and pointed me in the direction of Nonhuman Photography, by Joanna Zylinska. But part of the exchange raised the question about process and technology.

MO: “Thinking generally about, say, the love for film grain or b&w, once only technological limitations. Why not become excited by compression codecs or jpg artefacts?
Does ‘decisive moment’ need updating for a world of continuous surveillance?”

SC: “Book looks very interesting. A moot point as well. I kinda like the idea that all of this is ‘in the frame’. Hybridisation, digital talking to analogue, ‘non definable’ perhaps. That first photograph by Joseph Nicéphore Niépce – View from the Window at Le Gras. Experiment? Art?”

Elements of my somewhat eclectic studio practice is included in the current group exhibition called GEOMETRY & GESTURE at Bloc Project Space in Sheffield.

This show has taken some effort for sure. Curatorial wrangling, technical hacks, fast track graphic design solutions, screwdriver blisters, even press conversations on the phone walking in a gale! But it works, it works really well actually.

There is conflict for sure and creative differences shout to each other across the space.
This is positive I think. But there is also commonality and linkage in there.
Creative empathy.

I’d written this as an Instagram post leading up to the installation of the show:
A new, enormous, constructed painting combine is reaching the point of ‘is it or isn’t it’ in the studio. No, you don’t get to see work in progress! That’s like washing your filthy underwear in public isn’t it!
But these points in the creative process, they are like the tightrope walk element aren’t they?
Kinda perversely, I enjoy the thrill of potentially destroying something I’ve spent months wrangling into some sort of coherent shape. Then again, I get hugely excited (and anxious) about the fact it might actually work. (That’s a separate conversation though, about what works or doesn’t).

So, let’s try and find some logic to this thing I do. I really do like the phrase ‘perpetually experimental practice’ that you use in your question. I think that will be a template of sorts to hang / balance / prop up my response.

I was thinking about the origins of my fairly obsessive practice. This curiosity and the somewhat idiosyncratic creative habits. Could this be rooted in my rural working class upbringing where much of my childhood was spent fashioning things from sticks, stones, found stuff (Weapons in the main!). Dens (holes in the ground or tree dens). Rampaging through old derelict farm houses, inventing wild stories about what had happened and why. Dusty old coal sheds full of discarded old tools, broken furniture, boxes of yellowing newspapers, pallets of drying onions and pheasants hanging to cure…

So, process. Me? Well, it’s really about tests. Always testing. What will this do… Can this go there… For me, my creative practice is not about representation, even if a photograph has recognisable elements, an audio track has a vocal or a piece of film is probably sky or water. (I’m not entirely convinced I’m making ‘art’ either. That might be a good thing).
It’s more a gathering and ordering of a collection of memories. Distant past and visceral recent.
I am in a constant state of knowing and not knowing. Tests. Keep testing.

“I see explosives as my paints… There is an instinctive paranoia about explosives.
My show concludes the opposite of this, they are not being used for all the dire things they can be used for.
Some very gentle things can come from explosions…” Stephen Cripps.

I started to write this response to you yesterday actually.
I thought at that point it read really well.
Then I deleted the bloody file without having saved anything.
But that is quite apt, really. I’m always destroying stuff and out of that ‘carnage’ things emerge that interest and excite me. Make me curious to continue perhaps.

“People ask me, ‘Don’t you ever run out of ideas?’ Well, in the first place, I don’t use ideas.
Every time I have an idea, it’s too limiting and usually turns out to be a disappointment.
But I haven’t run out of curiosity.” Robert Rauschenberg. 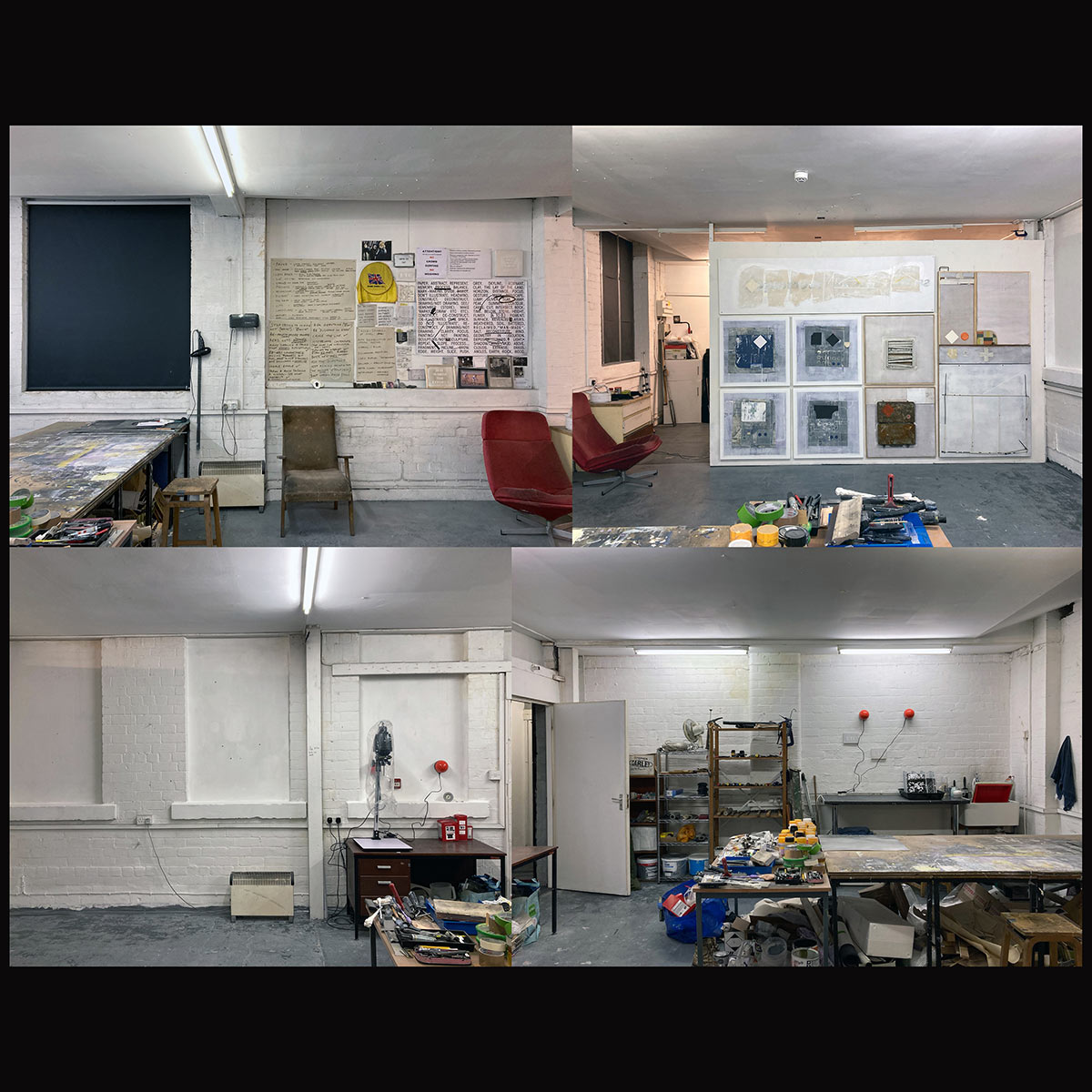 On one wall I have a collection of ‘notes to self’. These are a kind of mantra. Statements such as;

‘Risk everything. Be Duchamp on speed’.
‘Lens based. 35mm. Double exposures. Fucked up negatives’.
‘Manual edits. Slice / punch holes’.
‘Is it worth the effort?’
‘Throw a rock through a window and see what happens’.
‘Non-image. Minimal / Layered. Edges. Painting. Collage’.
‘Press, Emboss, Hammer. Gravity / Weight. Drawing. De-collage. Transaction’.
‘Us and Them / Us or Them. You and Me / You or Me’.
‘Everyday horror in another Land’.
‘Etc. etc.…’

A number of years ago I spent eighteen months making temporary work in the studio – Built and installed in the studio. Designed to last a few days. The ‘project’ was called 12X12. One particular piece, which I called ‘Three Little Words’ was entirely text based but materials and process drove this. I was scratching around for a solution to find a material and context for the word ‘Liberty’. Whilst making a cup of tea I spilt some accidentally. The liquid seeped across the (very) messy worktop. It found shapes between the paint stains. An ‘oil and water’ resist thing was happening. To cut a long story short, I ended up making the word Liberty in Times Roman just out of water on the studio floor. The surface tension of the water, its meniscus, holding it in place.

A while ago I opened an old case full of floppy discs. These were in quite a bad way to be honest! My Akai samplers operate with a floppy disc memory. So, I started to insert the discs and upload whatever was on there. Some of it was corrupted and all I got was a glitchy sound. Some had a sample loop from years ago. Some samples only loaded half the information. These became the starting points for aUDIOMAPS collaborations which have been central to my practice over the last two years or so. File sharing, remixing and publishing. Ownership and creative hierarchy turned upside down.

“The loops move out of phase. You begin to hear the phrase slightly ahead of its twin. The two identical sounds slightly out of sync created a third sound. By letting the recorders move at their own speed, and not treating the variation in speed as a defect, Reich discovered phase in music. It was a great discovery. It was as if a miracle were happening”. Alvin Lucier, Music 109 – Notes on Experimental Music.

Recently I was compelled to make something as large as I could physically manage in the studio.

I dragged some very interesting detritus in from a few neighbouring skips. A very old clothes drying rack. A rusty metal case. A defunct air vent. Some broken furniture. I had some old canvases with half formed stuff on them. I set to the canvases with a sander. The painted surface was quite thick in places so the sander pushed down through the layers. I was left with almost threadbare surfaces, the tenuous ghost marks hanging on vicariously.

I have this collaborative workshop I run with students in school. We collect a load of digital images (raw files) and we pool these centrally. We then use Audacity and Photoshop to corrupt and manipulate the data. We take them both ways. A visual outcome or an audio outcome. It is what it is. It’s surprising and not preconceived. It’s collaborative. It’s a shared creative commons.

You know that moment when you simply can’t sit still. You just have to move.
I suppose ‘Bad Choreography’ is the outcome here! I mean it’s ludicrous isn’t it? My athletic days are long gone. I never was a gymnast. My dancing is legendary but for the wrong reasons.
‘He’s mucking about’ I hear you say. And why not? Ah, but it’s all about balance, isn’t it? Or metaphor? Or visual pun?
I’m conscious but my thoughts are blurred. Somewhere else.
Occupied. Swamped. At breaking point.

Sleep is the dead weight of concrete boots that take half the day to shake off.
Wake up! Wake up! Wake up!
Walking with a rhythm slowed and slurred by middle age
A creaking and clicking downsizing human frame.
I try to keep up… I heard the news today, oh boy.
Why. When. How. Did we get here?

I think what is at the root of all this is finding the right process, materials and context that somehow best suits the thing you are trying to formulate and communicate. Perhaps. Pegs and holes?

“The class were required to “develop an analytical framework” to think about what they were confronted with; “a certain psychic force – a push to a particular kind of thinking”. Imprisoned in the room and supplied with different material each day students found themselves with the paradoxical freedom of being able to disregard art history and tradition, and begin back at square one with a block of polystyrene or a roll of brown paper”.

From ‘Thinking is Making’ referring to the St Martins A and B course.
The camera, the notebook, the recording device. The walks, bike rides, car journeys.
Conversations, Collaborations, Shared Visions and Concerns.
The half-remembered, periphery vision things. The city.

“With cities, it is as with dreams: everything imaginable can be dreamed, but even the most unexpected dream is a rebus that conceals a desire or, it’s reverse, a fear. Cities, like dreams, are made of desires and fears, even if the thread of their discourse is secret, their rules are absurd, their perspectives deceitful, and everything conceals something else.” Italo Calvino. Invisible Cities.

“Elegant frames sit alongside plastic cable, the King and the Pawn kept in the same box”.

Accepted for the RSA Open 2022