“…nature inspires awe and that awe underlies everything”.

The latest work of sculpture to feature on the ‘Wessex Plinth’ at the front of the Salisbury museum is ‘Anello Flow’ by London Group member Almuth Tebbenhoff. 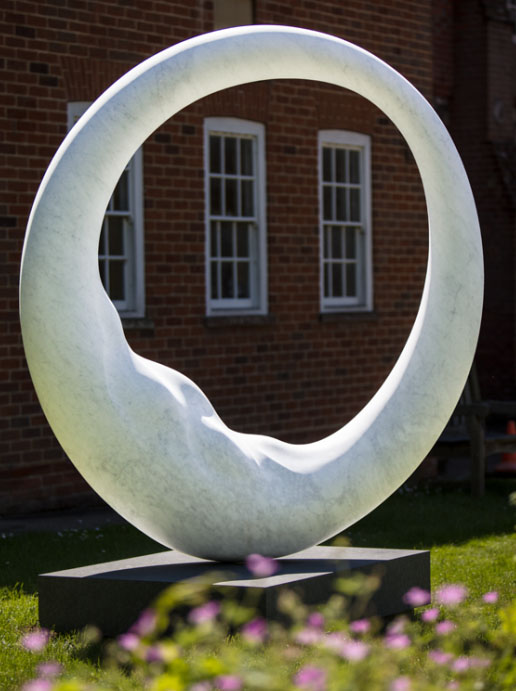 The work is on show until February 2019. There will be an accompanying solo show later in the year and Almuth is giving a talk on Tuesday 19th June at 2pm.

Almuth Tebbenhoff was born in Fürstenau in north-west Germany. In 1969, a year after completing her secondary schooling, she moved to the UK where she studied ceramics at the Sir John Cass School of Art. Following that, she set up a workshop in London making studio ceramics while developing ideas for sculpture. In the mid-eighties she expanded into metal fabrication, studying at South Thames College, London. A scholarship in 2006 brought her to the famous Studio Sem in Pietrasanta, Italy where she learnt to work with stone. She now spends several months each year in Pietrasanta carving marble.

In her own words:

I am highlighting the interconnectedness between the elements; Anello is inspired by the flow of water, it is carved from marble which is formed by immense pressure and heat deep inside the earth. Sculptors have forever desired to release this tremendously dense energy which compressed the marble initially, to make forms that lift and flow lightly, defying gravity.