Yes, it’s that Friday at long last! Like every Friday it’s invariably the last day of something (or other…). And this one is no different – it’s the last day of a term. But not just any term. No – today is the definitive last day for us Leavers. End of. Brink. Threshold. Leap.

So here we all are, raring to go, waiting to be summoned into the Assembly Hall for the final count-down-and-out. All too soon, though not quite yet, we’ll be beginning the Beginning of whatever might just throw us into our next fragmented difference. At the moment it feels like a fateful interim constituted by immiscibles  ̶  the now fading certainties of yesterday’s ‘no longer’ seem to be juxtaposed with the all too proximate but still absolutely ungraspable vagueness of the coming ‘not yet’. We Leavers (who still haven’t quite left and currently feel like remnantish flotsam) are already on the downward slide into a non-plussing day and region apparently without shape, identity, or purpose. Soon enough we’ll have to make the leap away from today’s ‘now here’ towards the ‘no-where’ elsewhere just up ahead.

Worse (or maybe better…) still, this Friday – our Friday and maybe everyone’s Friday  ̶  turns out to be that disquieting Mallarméan day  ̶  ‘Friday The Thirteenth’! It’s doubtless been chosen by ‘the powers that be’ to remind us (for the nth time) that we are, in the end, just dice, tossed for good or ill on Chance’s chaotic waves.

And already, as this very ‘Thirteenth’ collapses in on itself before our eyes, I’m beginning to catch the strains of Thelonious Monk’s eponymous composition: forever toying with the beat, its idiosyncratically controlled stammered phrasing stumbles its way jauntily but disconcertingly through the understated, sometimes even unstated (but always definitively implied right there), ‘common time’ – the time running disparately through all of us. And here now too, coming into singing stinging clarity, I can see again ‘The Garden of Eden’, Jan Brueghel the Elder’s extraordinary painting of the final millisecond of perfection’s last day. Right there, in the distant background, he fixes the hand reaching up to pluck the apple in a gesture whose completion will, wiping out perfection forever, inaugurate the (our…) collapse into time… history… chaos… whatever-Chance-reality. Could it be that Monk and Jan, in delirious cahoots with Art’s Body-Without-Bounds, are drawing us into the play of that fluid region, a space-time-in-between, which making-for-art always tries to make towards? Frankly I dunno, this was not something teachers ever raised in our rare art classes. Anyway the really pressing question for us now, right here, is: what kind of a ‘Last Day Timetable’ have ‘the authorities’ set up for us desperate and self-disintegrating Leavers?

Well, it seems that old Kristof Woods (known to all of us as ‘Woody’), the school’s ageing but apparently ageless Under-Groundsman, is retiring today too after a lifetime of faithful service. It turns out that, in his spare time, he’s a little known ‘naïve’ painter who occasionally displays some of his ‘things’ behind the bar in the local pub ‘The Dumb Waiter’ (do pop in if you’re ever in the area). As a retirement gift they’ve offered him the privilege of displaying a small selection of his pieces (he refuses to call them ‘works of art’) in the school gym for a couple of days. And they asked him too to design a one-off ‘Timetable’ for the Leavers’ last day to show some of the things he would have liked to ‘chance his arm at’ had he been lucky enough to go to a school like ours (instead of the failing secondary modern to which in reality he had from his earliest days been condemned and which he left, qualificationless, aged 15). Ah, there he is now standing by the school gate in the shelter of the ancient Indian Bean Tree which he himself is rumoured to have planted so many many years ago. Let’s see if he he’ll give us an idea of what he’s set up for us.

Woody hands the laptop to me and, as he instructs, I’m scrolling rapidly through the above text to reach an image of the very timetable we Leavers will soon be trying to come to terms with. But before I can make any sense of its incomprehensible programme – listen out! There’s the bell now summoning us to our Terminal Assembly. So sorry, we have to file into the Hall now (as we have done for so many many years) and stand silently in our allotted places while the staff begin to take their seats on the platform to finally get the ceremony under way.

Gotta go! Here’s the laptop – why don’t you take over from me and do your own scrolling now… 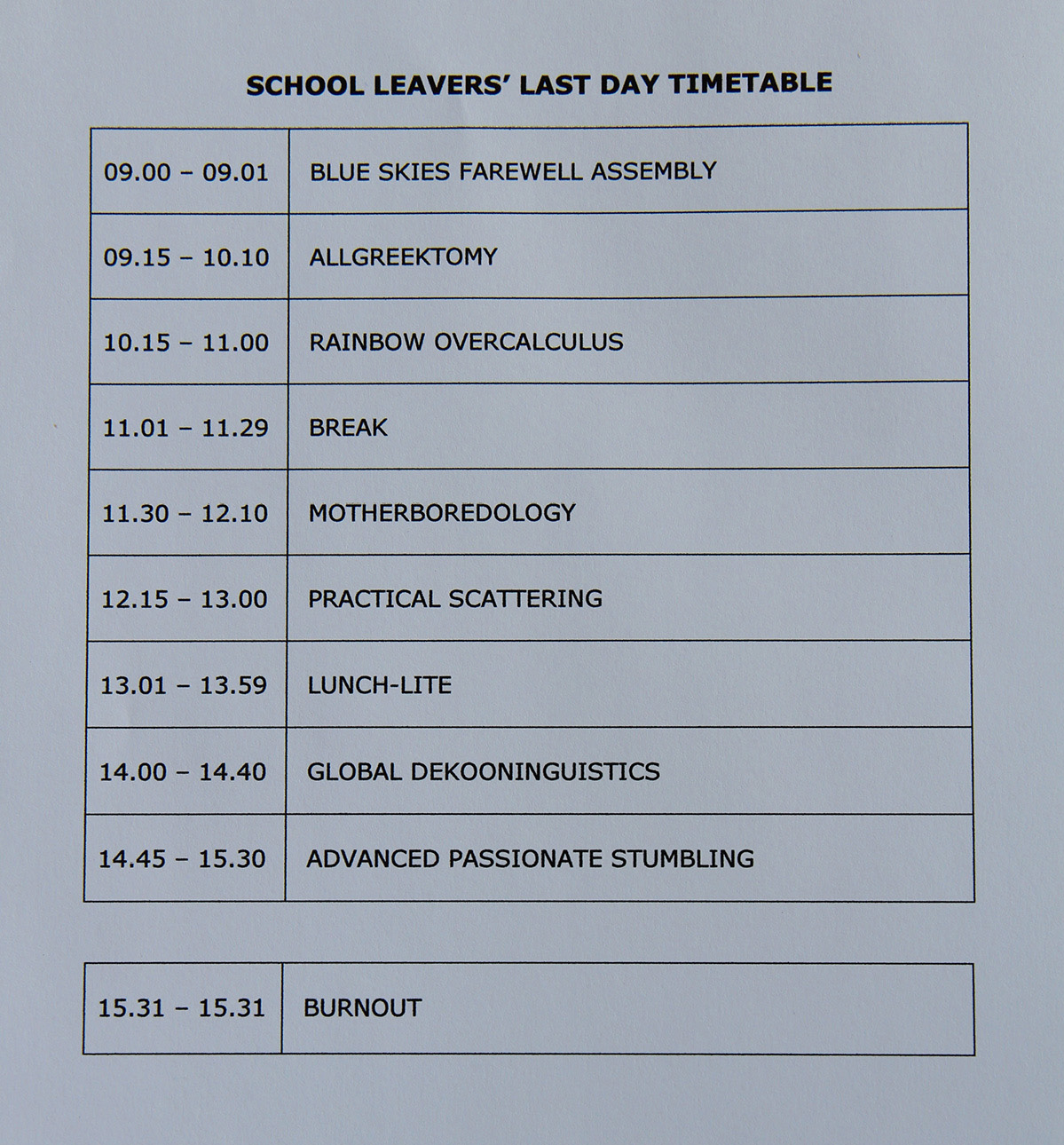 Of course Jan Brueghel’s remarkable painting can be seen in the National Gallery, while contrasting performances of Monk’s ‘Friday The Thirteenth’ are available on YouTube; my own favourite is the arrangement by the American composer Hall Overton for Monk’s big band and recorded at a New York Town Hall concert.