Mike Phillipson LG transports us to the East End of 1964 while reflecting on the consequence of capturing time.

Many years ago my experiences with a quirky little camera confronted me forcibly with the recognition that every photo, while seeming to enable a past-present ‘moment’ to live on in some way, simultaneously ruins that ‘same’ moment, converting it into a monument to the falling-down-and-away of everything, something as irrecoverable as the most distant ruin of an altogether lost past.

In and as its very photographing action the camera is a performative. It performs what it says: “Yes, you can trust me to give you an image that may help you remember this ‘moment’, but at the same time I consign it on equal terms to the fallen unreachable company of everything that lies behind us”, thus echoing, perhaps, Benjamin’s interpretation of Paul Klee’s painting ‘Angelus Novus’. Benjamin proposes that Klee’s angel, like all of us, has its back to the future towards which it is speeding and thus, condemned to look backwards, can see only the catastrophe from which it is fleeing which ‘keeps piling wreckage on wreckage’. The past as disaster perhaps… I still have the camera that steadily and inexorably opened this out for me in its own idiosyncratic self-ruining way. I’ve clung on to it as a monument to a now largely abandoned image-making technology. The Gallus Derlux is an aluminium 127 half-frame 35mm, f 3.5 camera made by Gallus, a French company of German extraction. Production of the Derlux ceased in about 1950. 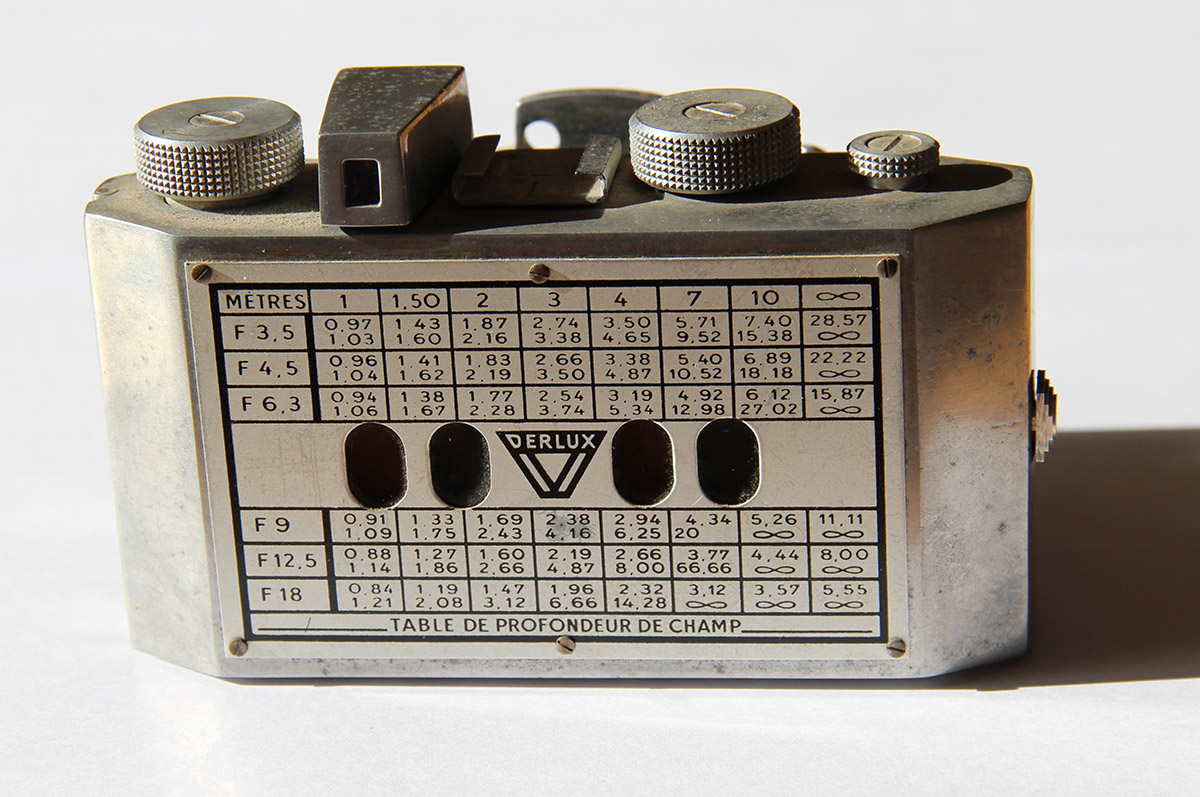 Its tarnished body and dusty bellows have long since breathed their last. On its lens cover the warrior icon, eyes fixed on the far distant, seems to propose that the Derlux could take on any challenger and come out on top. And the ‘profondeur’ (on the camera’s back) perhaps adds (to my francophone-sympathetic but very English ears) a certain resonant profundity to the dry precision of the ‘depth of field table’.

The Derlux had been passed to my dad by a photographer work-colleague and he gave it to me (without trying it himself…) when I came to London in 1964 to work in an epidemiological research unit attached to The London Hospital (now the ​Royal​ L. H.) in Whitechapel.

I hadn’t visited the East End previously. It was an eye-opener. Some weeks after my arrival Rauschenberg’s first major exhibition in England opened at the Whitechapel Gallery. I visited it in a lunch hour with colleagues. Waste matter, bits of redundant machinery (ruins…) implanted into paintings and objects, revivified by and themselves revivifying art. And there was that ‘bed’ – amazing… I was blown away!

But outside, just around the corner (Spitalfields and Brick Lane) a different kind of wasting-ruining set the terms for and permeated everyday life. Wanting to find out what the Derlux could do I used it around Brick Lane to try to fix some sense of living (working and playing) in what had, not long before, been a horror zone of wartime ruination. Twenty years after the war’s end much of the East End remained, in spite of the heroic necessary housing reconstruction programme, a war-scarred region of seemingly unstoppable decline already anticipating its own ruination. And all this a couple of stone-throws away from Threadneedle Street and the City’s emergence as a glassy steely hub of global capital’s 24/7 digi-flow!

Later in the year I took the Derlux to Greece and returned with spools of greyscale photos of ruins of a very different order. As you will see, in developing and printing these two sequences the Derlux was slowly revealing its own decline into self-ruin. No longer having the negatives I have scanned these images into the computer from remaining grayscale prints of varying size (with one colour exception). They remain for me nostalgically tart damaged reminders of living on under the grey rule of unresisted decay.

In the Parthenon greyscale the sky ‘behind’ its columns is visibly marked by a weave/waffle pattern. Light was entering in the wrong way! Yes – ​mene mene tekel upharsin ​ – the writing was there already on the wall-sky. Yet, strangely, there are no signs of this in the small colour image of the Temple!

But the photo of St. George in the East (the wonderful Hawksmoor church in Shadwell, whose interior had been destroyed by incendiary bombs), while showing the church in 1964 surrounded by post-air-raid derelict land, betrays on its darkened right-side the camera’s light-leak in a slightly different form. An aerial photo of the still unrestored church in 1960 (available on alamy.com) shows the widespread still untouched bomb-damaged spaces around the church and across Shadwell.

It seems that the Derlux was thus only able to offer a now shadowed-world. But, looking back from the current ‘privilege’ of our digi-tower, this was perhaps how it went…. and continues to go.

Here is a selection of images of the shadowed world I culled in the Brick Lane area. In some the camera seems to withhold its ailing shadowing, possibly as a result of changing light conditions or varying shutter speeds. Yet taken together they still offer, perhaps, a sense of daily life – working-playing there and then – necessitating a struggle to get by somehow in the face of, but in spite of, the permeating grey grain of things. And maybe still, now here….

The dense sprawling crumbling housing projects in the surrounding streets with their yards, courts, and bomb sites also acted as ‘playgrounds’….