Our series on long-serving Group members continues with the brilliant Gill Ingham who needs no introduction. 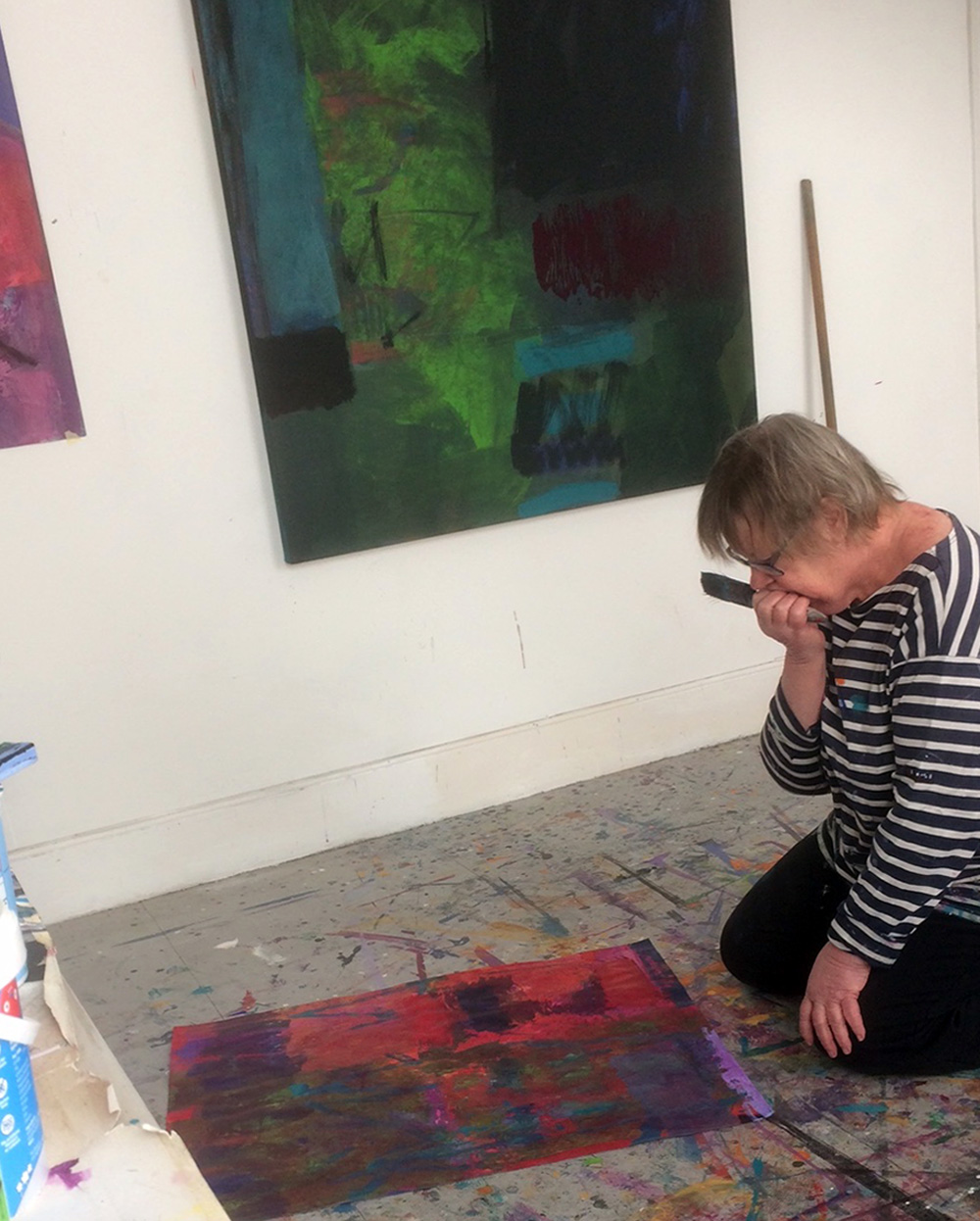 My dad was a typographic designer, and went to Camberwell School of Art, but when the war came along he had to give it up and go to war. He went back there afterwards and was in the same year as Gillian Ayres. He was a really competent designer, watercolorist and skilled oil painter, though my Mum had a real touch as a painter. So I suppose art was always knocking around in our family.

I was dyslexic as a child, and in those days they didn’t really understand it.  We used to have charts at school where children’s progress was measured, showing the brightest and the thickest. I was always at the bottom, but it didn’t worry me: in fact I was pretty much a failure right through my school life until ‘o’ levels. I can remember my parents going into school, and the teachers said ‘Don’t worry about Gill, she tries hard, but don’t have too many expectations’. Which was good for me, because it let me off the hook. Drawing and painting was all I could do in the early days, so I just knew I was going to go to art school.

I went to Ravensbourne Art college. For a while I was painting circles, they were absolutely awful and I couldn’t decide whether I was in the circles or outside them. I struggled on for weeks, wondering why none of the tutors were speaking to me about it. Then I suddenly decided to give up on circles and paint a square instead. Art college was much more relaxed then than it is today, and Brian Fielding was off to play golf for the afternoon. As he walked past me in the studio with his golf clubs over his shoulder, without stopping, he said ‘thank Christ for that Gill’. For me, it was the most motivational thing: he knew there wouldn’t have been any point in speaking to me up to then, only I could have got myself out of the hole that I’d dug.

Vic Kuell and Brian were my most influential tutors, and you can see elements of them in my paintings still. Brian was an amazing colourist, a very quiet, gentle but incredibly intelligent man, and also a good darts player. We played darts a lot in those days, in fact I think I got most of my art education playing darts rather than on the studio floor, because that’s where you talked about art and real life. You know when you’re going to hit the bullseye, and you know when you’re going to miss it. It’s the same with painting.
Mum and dad didn’t understand my work at all, or have any concept of abstract painting. So I decided to take them a big 3x4ft painting and hang it in their sitting room. They were quite put out and embarrassed by it, but too polite to say anything. Three months later, I had to take it away to put in a show somewhere, and not only did they really miss it, they said they missed the conversations that they’d been having with people who’d come round to the house. So they became very supportive after that.

I do see my paintings as conversations: sometimes they have conversations by themselves, sometimes the conversations involve me. I see painting as a sort of journey, and it is a journey where you take a pause now and again. If the pause is long enough it might get framed, then get unframed later on. You have to live with them.

I don’t know where they come from. You paint with notions and ideas, and you paint and think where did this come from? Because it’s nothing to do with the ideas you were dealing with, but there it is.
It’s the obsession with colour, space and gesture – that’s what my paintings are all about actually. I like the contradictions and tricks you can get, that you can play with colour and see where it sits – the same colour in different spaces and the way the colour communicates a colour that it actually isn’t.

One of the most important things in my daily art practice is the first three critical seconds, before memory kicks in, you can see your work in all its honesty. By the time you’ve got to five seconds, you remember making it, so it’s good to have a cup of tea ready at this stage.

When I was elected into the LG in the early 80s, I didn’t have to meet anybody: the requirement was that I’d shown with them three times, and they’d met me, and I believe the same went for the other 22 who were elected at the same time. A really nice thing about the LG was that it helped me when I didn’t have time to paint very much, and I still had the opportunity to put an odd painting in an exhibition.

One of my proudest LG memories was being involved with the 75th Anniversary show in 1988. It wasn’t an Open, but Members and Invited artists. We’d hired the Royal College of Art, which included the Henry Moore Gallery and the Gulbenkian Gallery, two huge spaces, and LG members could show a really big painting each. At that time, we selected work like in the old days of the Royal Academy, people dropped off the work, the paintings were bought in and marched in front of about forty of us as we all sat there: we had a simple system of yes, hold, or reject, into three piles. We then counted the ones that were in and we looked again at the ones that were in the hold.  Brian Fielding had sadly died, but we were able to put a quite substantial exhibition of his work within the show, so that when you went up the steps into the Royal College, there was a small gallery filled with Brian’s work, and then you saw Elizabeth Frink’s massive Walking Figure sculpture marching through the door.

I have a funny memory of a show we once had to hang at the Camden Arts Centre: I think there were about 10 of us in the hanging committee at that time, and like today, there were quite a lot of different philosophies within the LG. So we laid out the entire show and went off down the road for a pub lunch, which turned into one of those enjoyable social occasions when London Group people get together. But the time we got back to the Camden Arts Centre, ready to screw it all to the wall, we found it had been completely rehung by another LG set, who just decided to change it!

Gill Ingham was in conversation with Claire Parrish, 2020